Zimbabwe army 'to go from mines' 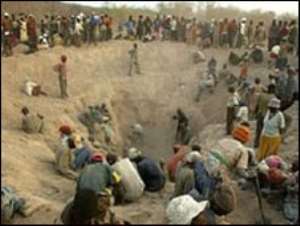 It quoted the deputy mines minister in the unity government as saying soldiers would be withdrawn "in phases".

The army says it was to prevent illegal mining, but rights groups accuse them of involvement in forced labour and an alleged massacre of diamond diggers.

A team from the Kimberley Process - the organisation which aims to stop the use of diamonds to fund conflict - is currently in Zimbabwe investigating the allegations of abuse.

It urged the unity government formed in February to demilitarise the diamond fields in the east of the country.

"We agreed to remove soldiers but it will be done in phases while proper security settings would be put in place," Deputy Mines Minister Murisi Zwizwai is quoted by Zimbabwe's Sunday Mail newspaper as saying.

When the army moved in some 200 people were killed in three weeks, witnesses allege.

If the diamond industry was legally regulated, Human Rights Watch estimates it could amount to $200m (£122m) a month for the poverty-stricken country, which is struggling to raise aid from Western donors.

I Wish You Die In Prison — Judge To Convict Who Defiled His ...
7 minutes ago