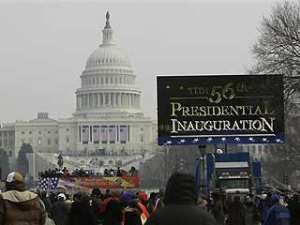 
In the spirit of transparency, the Obama Administration posted on its White House blog a detailed list of who makes what at 1600 Pennsylvania Avenue.

According to the WhiteHouse.gov blog, every administration since 1995 has been required to "deliver a report to Congress listing the title and salary of every White House Office employee." In January, in one of his first acts as president, Obama announced that he was freezing the salaries of employees who made more than $100,000 a year, saying, "Families are tightening their belts, and so should Washington."

Other notable salaries:
— $102,000 Reggie Love, the president's personal aide and "body man," who was named the Hottest White House Employee according to a Huffington Post poll, barely edging out "Favs."

— $113,000 Desiree Rogers, who is on every D.C. socialite's speed-dial, was tapped to be the White House social secretary, charged with coordinating every social event held by the White House. The stylish Chicagoan pals around with Anna Wintour and was the subject of an extensive Vogue magazine feature.

— $36,000 That's how much Darienne Page, the White House receptionist, or "ROTUS" takes home annually. In a recent New York Times profile, Obama introduced Page as "the receptionist of the entire United States." Before serving in the Obama White House, Page served as an Army sergeant in Iraq under George W. Bush.