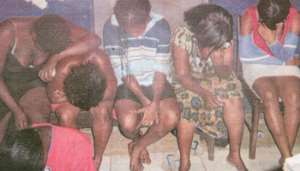 Child prostitutes are reported to have swarmed the streets of Elmina and Cape Coast ahead of the visit of US President Barack Obama.

According to Joy Correspondent, Richard Kojo Nyarko, the prostitutes are gearing up for mass 'harvest' as the Region hosts the US President and a host of other tourists.

The prostitutes are said to be within the ages of 13-18 years.

Whilst some of the prostitutes are school drop-outs, others Kojo Nyarko observed are still in school and need to make money for their upkeep.

Araba, one of the prostitutes, in an interview said she was forced into the business two years ago due to harsh economic conditions she was going through.

On a normal night she makes at least GH¢ 30.00 but that is expected to increase with the coming of the US President and the PANAFEST celebration days after the visit.

She admitted the work is dangerous especially with the threat of HIV AIDS, 'but man, or rather woman' must survive.

When condoms are not used by clients, the lowest charge is GH¢ 10.00.

You’ve Fulfilled Most Of Your Manifesto Promises; Objective ...
1 minute ago

How Slain Mfantseman MP Begged Killers To Follow Him Home Fo...
16 minutes ago