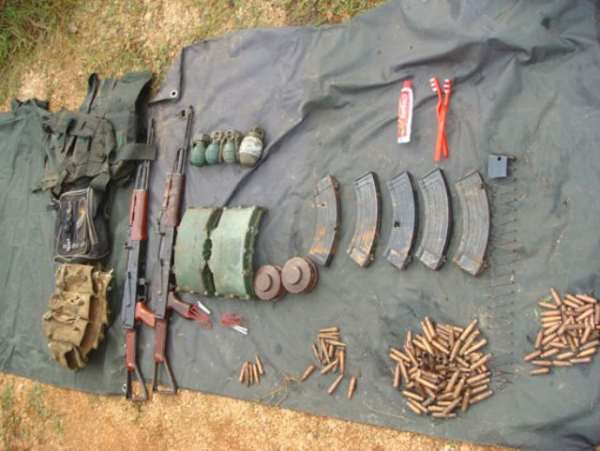 By Ahamefula Ogbu, Port Harcourt
Rivers State militant, Mr Solomon Ndigbara, who goes by the moniker Osama Bin Laden, was the first to accept the federal government's offer of amnesty yesterday when he laid down his weapons and formally handed them over to the Inspector General of Police, Mr Mike Okiro at Yeghe in Gokhana Local Gove-rnment Area of the state.

The ceremony which was expected to commence early yesterday morning did not start till about 6 p.m. when the IG arrived from Abuja and headed straight to the Primary School IV where every indigene of the area had gathered to watch the ceremony.

The handing over was considered symbolic as only ten automatic weapons were surrendered. Ndigbara had earlier in a chat with THISDAY said that he had most of his weapons in the creeks which would be handed over if he goes there.

The acceptance of the amnesty offer by Bin Laden, said to have been in charge of the Ogoni axis, came on what appears to be a division among the ranks of militants with some willing to accept the offer by Yar'Adua, while others are rejecting it.

For instance, the Joint Revolutionary Council (JRC), an umbrella body for militants in the Niger Delta region, dissociated its members from the amnesty deal, but some of its notable commanders have already gone ahead to address the press accepting it.

Cynthia Whyte, Spokesp-erson for the JRC in a statement said: “I wish to announce a complete dissociation of the Joint Revolut-ionary Council from the Umar Yar'Adua amnesty largesse even though we recognise that it would provide great succour for bandit elements within renegade criminal ranks.

“This so-called amnesty is the latest in a series of 'Greek gifts' awarded to the people of the Niger Delta to enable smooth access to the oil in our communities.

“Others include the Niger Delta Development Commission (which was designed to fail from the onset) and the Ministry of Niger Delta headquartered in Abuja.

Meawhile, while giving up his weapons, Bin Laden informed the IG that he was touched by God to abandon his former position and called on the federal government to “do whatever it has said it will do and we will keep to our own side of the bargain,”

Responding, Okiro who later went into a closed door meeting with the reformed militant assured him that the federal government would keep to its side of the bargain and would not renege on the terms of the amnesty.

He also stated that the handing over of the arms unconditionally was a proof that both sides were not only serious but had confidence in the process which he hopes will bring peace to the region.

He called on other militants to follow the example of Bin laden and hand in their weapons to benefit from the amnesty.

Lawyer to another militant, Ateke Tom, Mr. Ikenna Enekweizu, Com-missioner of Police in Rivers State and Evangelist Testimony Etteh were all on hand to witness the surrender of the guns and the destruction of his shrine.