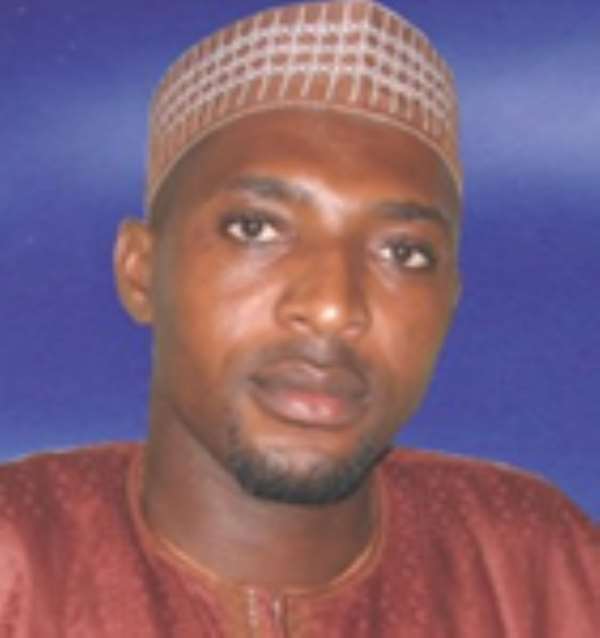 The case against Youth and Sports Minister, Muntaka Mubarak, is shaping up to be the first corruption scandal of the Mills era and I am afraid the administration is not handling it as well as it should to send out a strong message that graft will not be tolerated. It took the president almost a week to instruct Mr. Mubarak to step aside to make way for investigations to start.

The president, in fact, has been criticised for dithering and initially offering Mr. Mubarak what seemed to be an unlimited time to respond to the allegations against him. In an attempt to silence the critics – including people from within the ruling party – the president has ordered Mr. Mubarak to step aside to pave way for investigations to start.

As he packs out of office, Mr. Mubarak is looking up to God to help him put the “devil where he belongs”. The devil he's referring to is the principal accountant of the ministry, who has presented a dossier detailing irregular (and senseless) expense claims allegedly made by Mr. Mubarak.

In the 17-point dossier, Adim Odoom (the accountant) claims that his “attempt to help the minister run an efficient and effective ministry has aroused the anger of the minister” who “has masterminded his transfer” from an office he has occupied for just three months.

Much of the allegations against the minister are hard to believe. For example, Mr. Odoom claims that “the minister requested for 1000 Ghana cedis per match for the services of a mallam [fetish priest] and demanded cash immediately.”

Mr. Mubarak is also alleged to have demanded a refund of 674 Ghana Cedis “in respect of baby oil, baby food, mouthwash and other household items.”

The principal accountant also accuses the minister of requesting “a refund of 15,200 Ghana cedis with a receipt in the name of Zinabu Mubarak in respect of meat and other food items purchased from the market.”

That's not all. Mr. Mubarak is said to have travelled to watch the finals of the Championship of African Nations in La Cote d'Ivoire with his girlfriend (who happens to be the parliamentary majority leader's secretary) and later “insisted” that the “ministry should pay for her ticket.”

The dossier makes very interesting reading and it seems to make such a strong case against Mr. Mubarak that even with divine intervention, he might not come out of this scandal unscathed.

Mr. Mubarak has vehemently denied most of the allegations against him. “My innocence will be established,” he says. Yet, he admits some wrongdoing with the flimsy excuses that he was “misled”. In making such admissions, he claims that there has been a ploy (by a supposed “mafia” at the ministry) to discredit him. For example, he says that members of the mafia deliberately paid him more per diem than he deserved –2000 instead of 1200 dollars.

“Since it was their design to scandalise me they deliberately prepared a voucher which they knew exceeded my maximum allowable per diem on that occasion and then approved it so that when I, in ignorance of the maximum allowable and assuming that my staff acting professionally and properly in the determination of my per diem, took the money they would be able to use it as part of their ammunitions against me.”

Mr. Mubarak also claims that the principal accountant, Mr. Odoom, gave him some misleading advice which led him to claim – and receive – refunds for household items such as mouthwash and baby lotion.

It is good enough that the president has ordered Mr. Mubarak to step aside for investigations to commence. But it appears that the probing eyes of the investigators are more focused on the accuser than on the accused. The National Security Secretariat is reported to have taken over the investigations and, according to the 'Daily Graphic', they want “to determine whether or not the said allegations were a frame-up.”

Apparently, they have fallen for the specious suggestion that there is a so-called “mafia” which wants to do the minister in. As a result, they have questioned the whistle-blowing accountant more than they have questioned the man he blew the whistle on. Last Friday evening, there were rumours that he had been picked up and thrown in some 'counter-back' somewhere. Let's hope this is untrue. Whatever the case may be, however, I get the sense that there is an attempt to intimidate Mr. Odoom and force him to shut up. If the president is serious about fighting corruption, he should be honouring people like Mr. Odoom – not setting the dogs of “national security” on him.

In the meantime, Mr. Mubarak needs to get some things very clear.

First of all ignorance is not an excuse. If his claim that he didn't know, accepted, can you imagine the number of government officials who will steal so much from us and turn around to tell us that they didn't know the money was not theirs?

“Oh, there was so much in front of me, I thought I could take a little,” one would foolishly say. “Forgive my ignorance.” This is unacceptable.

Secondly, a man who goes about signing vouchers out of ignorance is nothing but an i***t. He cannot be trusted to exercise good judgment. Muntaka has shown that he's not fit to be a minister and he should be cut lose. If he doesn't go, we would wake up one morning to hear that he has signed off on a document to turn the Accra Stadium into a landfill site.

Thirdly, if I am forced to take sides on this matter, I will stand with Mr. Odoom. He says his boss forced him to write an overpayment voucher but the – and the boss, who signed the voucher and took the money, claims that he appended his signature in ignorance. Who should we believe? I'd gladly give the benefit of my doubt to the principal accountant – not the minister.

Finally, the fact that the minister is refusing to take responsibility for his actions and is blaming everything on a plot to kick him out of the ministry exposes his crass mentality and the fact that he lack the essential leadership skill of taking responsibility – no matter what. Each of us has someone (or some people) who want to see us fall and so this so-called 'mafia' can be found in every organisation. What you don't do is play into their hands. If you do and you get trapped, you accept responsibility. You don't go about crying about some “ammunitions” against you.

And in the case of Muntaka, it is not the so-called 'mafia' which forced him to sign vouchers he had no idea about or claim expenses he didn't deserve. He had every opportunity to question those vouchers. If he says he did so out of ignorance, I don't see why anyone should feel sorry for him. Ignorance has never been an excuse. Not yesterday. Not today! Anyone who clutches at “ignorance” as a defence when accusations are darting in his direction doesn't deserve to be called a leader. So in the event that Muntaka Mubarak escapes the long arm of the law (either by divine intervention or political machination) he should not return to the sports ministry – or any other ministry for that matter.

Two persons accused of killing 11-year-old boy at Kasoa to b...
53 minutes ago

Akufo-Addo can’t even bath in the Presidential jet, it's not...
53 minutes ago