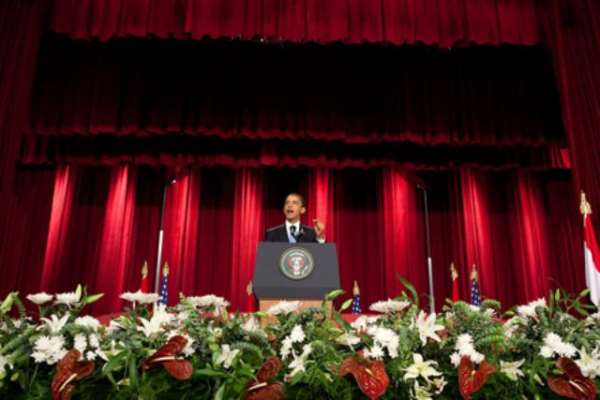 The whole rhetoric of the 'Clash of Civilisations' between Islam & Christianity and attempts by some thinkers & writers in the last decade to prove this, all the misconceptions regarding this were blown away when the American people elected an African American of Muslim origin, Barack Hussein Obama as their President. While a large 'credit' for deepening misunderstanding & hatred between the Muslim world & America goes to the American policies, this is also true that the people who are spreading terror in the name of Islam & Jihad are equally responsible for this. While the crop of this suspicion between was laid down by George Bush I, it was irrigated by the administration of George Bush II. By looking at the arrogant and revengeful action of the Bush administration post 9/11, the entire world felt that a big part of this world is confronted with the clash of civilizations. But the truth is that this type of analysis & conception were all baseless.

Recently when US president Barack Obama started his address in Cairo University Egypt, by saying “Asslam Alaikum”, whole Muslim world got emotional. In his address, Obama briefly mentioned the contentious issues of Israel-Palestine, Iraq, Afghanistan, and Iran and besides putting the American viewpoint he sought support of the Muslim world to resolve these issues. By mentioning the texts of holy Qoran, Obama tried to establish that America as well as Christianity, all have respect of Islam and see Islam as a tolerant religion. Before visiting Cairo, president Obama went to Saudi Arabia & by meeting Sheikh Abdullah, he offered a hand of friendship towards the Muslim world.

Though some people are critical of the attempts of Obama to establish world peace, but the steps taken by Obama are being welcomed by the peace loving nations & their leaders. First sound of criticism itself came from the political opponents of Obama in America. Some opponents were of the view that by the address of Obama in Cairo, it seemed that he is apologizing for the policies of George Bush. Whereas Obama tried to convey through his address that America is not the enemy of Islam. Through his address, Obama tried to remove the decades old suspicion & differences between America & the Islamic world. Though he accepted that there is a situation of disbelief in both sides from a very long time, but for future he stressed that both the US and the Islamic world have to develop mutual understanding and mutual respect. That's why in the commencement of his address, Obama said that “I have come here to seek a new beginning between the United States and Muslims around the world; one based upon mutual interest and mutual respect.”

In fact, the continuous blind support of America to Israel is in the depth of suspicion between the Muslim world particularly gulf countries and the US. This suspicion turned into belief in 70s when during the Iran-Iraq war, America supported Iraq and thus tried to weaken these two big Muslim countries. Later, America supported the inhuman forces like Taliban in Afghanistan to flush out the Soviet forces. In 1990, as a result of the capture of Kuwait by Saddam Hussein, the way America entered Kuwait and setup its military base there, this too didn't go down well with the Muslim world. Besides, the Islamic Revolution in Iran too created anti-America environment. 9/11 terror attack on America and resultant American interference in Afghanistan and Iraq worked as the final nail in the coffin. Countless deaths of civilians and the wretched geography of these two countries after the American forces' interference proved to be a 'testimony' for the 'clash of civilizations' besides hatred & suspicion.

Certainly Obama was true in saying in his address that the misunderstanding prevailing from decades can't be removed merely by a speech. But he stressed that to bring peace, the series suspicion, contentions and differences should be stopped. Obama also asked Israel to accept the existence of the Palestinian state and also suggested it stop building settlements on West Bank. Obama tried to convince the Muslim world that all the resources of Iraq belong to the Iraqi people & the US has no intention to capture them. He reiterated that the American troops would leave Iraq by the timeline of 2012. Regarding Afghanistan, he said that the American forces would return from Afghanistan when they would feel that Afghanistan and Pakistan are now freed of extremist militants who wanted to target America & American people. Talking about the nuclear programme of Iran, Obama clarified that though no country has the right to decide, which nation should possess nuclear arms, but there should not be an arms race in the Middle East.

Notwithstanding the criticism of Obama's address to the Muslim world, the fact is that the peace loving Muslim of every country is happy and optimistic. Now it is the responsibility of the Muslims nations to understand the hand of friendship offered by Obama and the countries where there are extremist forces, they should counter these forces on their own so that the US needs not to interfere. Obama too should call back forces in stipulated time not only from Iraq and Afghanistan but also from other parts of the world, where they are unreasonably stationed, and close all those military bases. If Obama takes positive steps along which the positive speech, then the history will recognize him as a new messenger of world peace.

Galamsey fight: Four Chinese nationals to be deported
41 minutes ago

Gov't must opt out of Sputnik-V vaccine procurement contract...
41 minutes ago