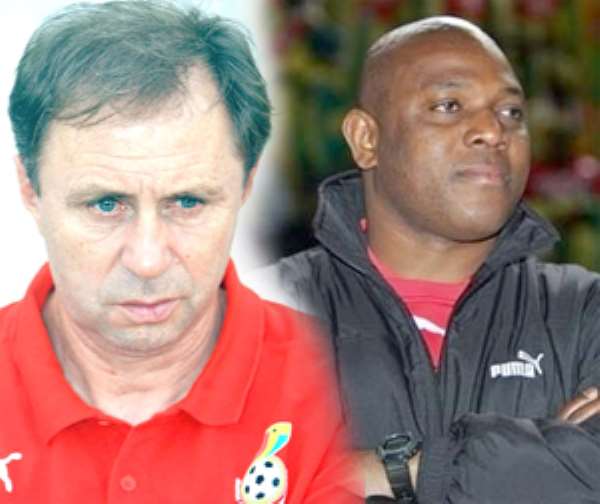 Milovan Rajevac and Stephen Keshie IT IS a weekend full of intriguing action as the Black Stars of Ghana play as guests of Mali in a Group D World Cup/Africa Cup of Nations qualifier.

Across the globe, from South America to Concacaf, Asia and Africa, qualifying round of matches would take place.

The second match of first round matches in Africa would gather momentum as the Black Stars line up in Bamako to battle the dreaded Lions of Mali.

The Malians appear to have arguably the best arsenals on the continent at the moment with Sevilla of Spain's Fredrick Kanoute, Seydou Keita of FC Barcelona, Mamadou Sidibe of Stoke City and Mohammed Sisoko of Juventus in Italy playing in top notch clubs in Europe. Nevertheless Ghana would also parade some of the best on this continent including  Michael Essien of Chelsea, John Mensah of French top side Lyon, Anthony Annan of Rosenborg in Norway, John Painstil of Fulham and Kwadwo Asamoah of Udinese.

Coach Stephen Keshie has promised hell for the Black Stars but Milovan Rajevac, Serbian coach of Ghana is upbeat about winning in Bamako. He told the press that “Ghana cannot fail the nation. The priority is to qualify for South Africa 2010 and we have to be part of the mundial which is our primary goal”.

He added, “We think that all our matches are going to be tough, there are no easy games at this stage but we want to win and will win”.

In the other Group D game, Benin would host Sudan in Cotonou. Benin, a rising football nation, would be counting on the exploits of Razak Omotoyossi and Ssessgnon to dismiss the bluff of the Sudanese.

In Group A, surprise leaders Gabon who stunned Morocco 2-1 at home would welcome Togo to the Libreville Sports Stadium.

The Azingo Nationale side is yet to lose a match at home and would be hoping to add Emmanuel Adebayor led Togo to their list of victims though the match itself would be very tough.

Cameroon would be hoping to get their first win of the campaign after succumbing to Togo 0-1 in the first match as they host Morocco in Yauonde. A defeat for the Moroccans might end their world cup ambitions.

The Super Eagles, back from their European tour with fine outings against Ireland and France, would be hoping to defeat Kenya easily in Abuja today. Though the Nigerians would be without England based Obafemi Martins, it would welcome John Utaka and Chinedua Obasi to triumph over the Harambee Stars who have called up Dennis Oliech of French side Auxerre and veteran Musa Otieno of South African side Santos.

Cote d'Ivoire would be seeking to win against Guinea in their dreaded clash in Conakry. The Ivorians would be welcoming Didier Drogba to partner club mate Salomon Kalou upfront.