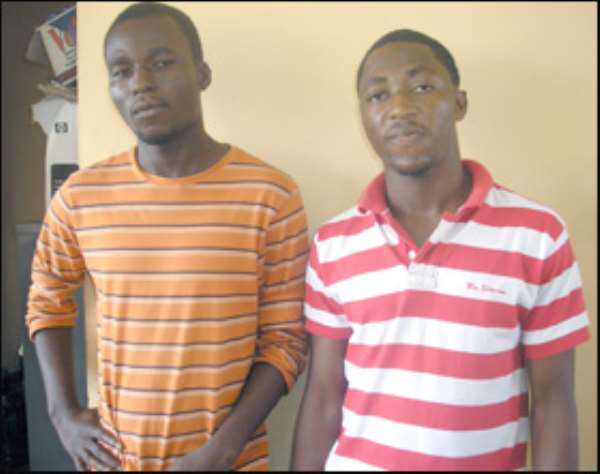 Sakawa boys THE INORDINATE ambition of some 'sakawa' boys at Sokode-Ando in the Volta Region to become fabulously rich overnight turned nightmarish, as they were allegedly chased out of a cemetery by ghosts in their attempts to exhume dead bodies.

The boys, six in number, included Favour, Ador Kofi, Atsuvia and Awi Kodzo. They were looking for body parts of twins for money rituals to make their businesses flourish, as well as fortification against detection anytime they swindled unsuspecting members of the public of huge sums of money.

They were said to have succeeded in exhuming one of the dead bodies with a charm allegedly furnished them by a juju man at Mafi, who was at the center of the incident, and were attempting to do same to the second when a human-like figure appeared all of a sudden on the grave, moving towards them, while asking them to come and take him away.

They allegedly bolted from the cemetery immediately in a stand-by vehicle and headed for the juju man's abode at Mafi with the parts that they had succeeded in getting, where they were asked to go and bring the rest of the parts belonging to a twin to allow for a complete performance of the rituals.

The suspects were also alleged to have sent a colossal sum of money that they had borrowed from a number of people in Ho, to be multiplied by the juju man, but it did not work. Luck eluded them when after a long wait in vain in anticipation of the money, they were faced with intense pressure from their creditors, leading to the arrest of Awi Kodzo, who allegedly stood surety for the loans.

The severity of the issues prompted chiefs and elders of the area to summon a well-attended meeting last Sunday, May 31, 2009, chaired by the Paramount Chief, Togbe Fia Korku. It was at that meeting that Awi broke the news about the unfortunate incident.

Some residents who spoke to DAILY GUIDE on anonymity, expressed dismay at the boys' actions, adding that the community was now in a state of fear, because it had never been hit by such an unfortunate event. Delving more into the issue, they hinted that somewhere in April this year, the boys hatched a plan to visit a powerful spiritualist who could make them affluent within a twinkle of an eye.

They thus went to the juju man at Mafi, after one of them had recommended him to the ring as a great spiritualist who was capable of making their dreams come true. During their initial visit, they were asked to produce human parts, preferably of twins to allow for the execution of the rites.

The suspects later went to the public cemetery at night, where they unearthed the body of a twin with the charm and were about to commence the second exhumation when they were scared away by the apparition.

They revealed that all this while, the 'sakawa' boys remained unperturbed, and still went to the juju man with the parts that they had succeeded in getting, only to be turned away.

To test the potency of the juju man's prowess, the boys, DAILY GUIDE was told, allegedly asked him to kill a listed number of people in the Sokode-Ando town, including the Chief and one other woman, whom one of them claimed had ever insulted him-a demand that plunged the community into a state of calamity, characterized by lorry accidents over the past few weeks. They were said to have sent personal effects of those they had targeted, including a picture of the chief to the spiritualist, as demanded.

As fate would have it however, it was not long before creditors started battling them over their money. Awi was eventually arrested by the police for loan default and after his release on bail and subsequent narration of the story to his brother in Ho, he was brought to Sokode-Ando to give account of the incidents in the presence of the chiefs and elders of the area, hence the meeting last Sunday.

However, the boy identified as having mooted this grand agenda, was said to have denied his involvement at the public gathering, urging the chiefs and elders to consult the oracles to ascertain the truth. This was at a time his conspirators were on their knees begging for forgiveness amidst shedding of tears.

The next meeting on the issue was scheduled for Sunday June 7, 2009.

Meanwhile, the case is yet to be reported to the police.