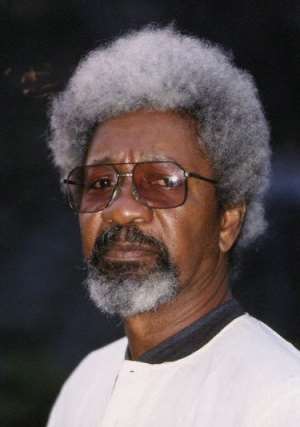 Not only did he employ a Ghanaian houseboy, Francis, Wole Soyinka sometimes makes a caricature of his critics by comparing them with chichidodo, a Ghanaian mythical bird that hates shit yet only eats worms. At least that is how he ridiculed equally brilliant literary minds, Chinweizu Onwuchekwa and Ihechukwu Madubuike in Art, Dialogue and Outrage, a book he published in 1988, to respond to accusations that he was unclear on the position of the oppressed. Ayi Kwei Armah had earlier in 1968 made a reference to the bird in The Beautyful Ones Are Not Yet Born. The bird is not a particularly popular one in Ghana; many young Ghanaians may not be familiar with its metaphoric application. I didn't know about it until I started writing these cold words this week; I learnt it from Soyinka. We could get away with the insult that the dramatist may have picked the bird's name during his brief stay in Ghana in 1974, when he edited the magazine Transition and also served as a Visiting Professor at the University of Ghana, Legon. He must have gotten more than a bird in that period. For somebody who wrote The Trials of Brother Jero in just three days, he could write the whole of Ghana in a day, and tell our story better than most of us. It had been a while since he publicly connected with Ghana, apart from his appearance on Kwaku One-on-One, where the ace journalist chose a drinking bar as the setting for the interview. They sat on bar stools. The venue was quite appropriate because Soyinka loves good wine, and he likes it very good.

Soyinka doesn't exactly tell you to go to hell when you deserve to be in hell; he shows you hell, often investing his words with so much power and imagery that they sound quite hellish, in fact. Recently, he was said to have told the people of Nigeria that “if Obama decides to grace Nigeria with his presence I will stone him. The message he is sending by going to Ghana is so obvious, is so brilliant that he must not render it flawed by coming to Nigeria any time soon.” The reaction was very swift. An Advisor to President Y'arAdua wrote: Soyinka's statement, which he is entitled to, is most unfortunate and undiplomatic because he chose the wrong venue and ended up embarrassing the Italian Ambassador who had invited him for an art exhibition. It is most unfortunate that a prominent citizen like Soyinka seized the opportunity of a diplomatic invitation to attack his country.” The Nigerian Presidency has, however, said that it has no problem with Obama's choice of Ghana on his first visit to West Africa as the first African American president of the USA. Besides, Ghana is a friendly ECOWAS member.

Meanwhile, the Nigerian media continue to discuss the Nobel Laureate's statement, as the country tries to understand herself in the light of a battered international image, due largely to their mismanagement of their abundant oil resources, a chequered political history and their recent diabolic democratic elections. Because of Soyinka's popularity, sections of the international media have also joined in the discussion, highlighting the quintessential Nigerian problem, which isn't very peculiar to the oil rich country. The African Union is essentially a union of African countries; they all share similar characteristics. The Chairman of the African Union recently espoused his distaste for democracy when he stated at an AU summit that democracy in Africa only leads to bloodshed. Tanzanian President, Benjamin Nkapa, one of the continent's most respected leaders, gave globalisation a terrible blow by suggesting that it is the continuation of colonialism and slavery. In all these, however, one thing is clear: Ghana's democratic credentials have been well sold in the international community. Suddenly, we are the best example on the continent, having organised series of successful elections that have seen power peacefully changing hands from incumbent to opposition, and the opposition coming back to snatch it from the incumbent. So, perhaps, the Americans have a good reason for choosing Ghana as the first country in West Africa to receive Obama.

So, why are Nigerians worried that the American President chose Ghana over their country? I am not familiar with the genesis of the rivalry between Ghanaians and Nigerians, but I have had reason to comment on the recent trend where Nigerians are relocating their families and businesses to Ghana. Tyre manufacturers Dunlop Nigeria have moved base to Ghana while several Nigerian companies are in queue to relocate. Then recently, we read that the educational system in Nigeria is getting so bad that most Nigerians are prepared to pay in excess of $6,000 to sponsor their wards in Ghanaian universities. Today, most Ghanaians have Nigerian neighbours, especially those in the middle-upper class neighbourhoods. They are struggling with the reality that their ECOWAS neighbours, most of whom bear multi-syllabic, earth-shattering names, which usually mean money or the desire to acquire lots it, would one day take over their country. They have brought along their banks, their children and their companies. Existing trade partnerships and diplomatic agreements mean that Ghanaians have to prepare themselves for a full Nigerian onslaught soon. Some of them are getting uncomfortable with the prospect, as they dread the social and economic implications of a full-blown Nigerian Exodus. But, so far, it has been a peaceful, even if a suspiciously beneficial enterprise.

What is the state of affairs in Nigeria today, really? Ambassador Jibrin Chinade says Wole Soyinka was “highly embarrassing” to have denigrated himself and his country for choosing an art exhibition to treat his country like a villain in one of his plays. Ambassador Chinade claims to have read all of Soyinka's books, but he seemed to have missed the reference to the common enemy in Jero's Metamorphosis. The play starts with an important proclamation by Jero: “In times of trouble, it behoves us to come together, to forget old enmities and bury the hatchet in the head of a common enemy.” These are terrible times in Nigeria? Niger Delta is gradually becoming a curse, as the country struggles to find answers. On many TV interviews in the USA, Soyinka repeatedly employs the word 'diabolic' to describe the clashes in the Niger Delta. President Yar'Adua has so far failed to address the problem even though he gave more than a palpable indication in his inaugural address that he would tackle it. Well, that should remind Ghanaians of Dagbon and the politicisation of the whole conflict, with high profile politicians openly laying the blame on others. The Chichidodo, after all, is our creation. If we hate shit that much then we shouldn't eat foods that would fill our bowels. And it pays how we empty those bowels, lest we make a mess of it all.

Soyinka is no Teresias but he does see far, often very far. Ambassador Chinade may be disappointed to learn that the common enemy that Jero talks about is Nigeria itself. Perhaps Nigerians do not realise that it 'behoves them' to do a lot better than the institutionalised waste and chronic non-performance in nearly all sectors of the economy. If the fraud in the last presidential election that produced Yar'Adua could not be contained because of the big numbers at the federal level, what about the governorship contest in Ekiti state? Some Nigerian social commentators joke that the malpractices in that election alone will rival the size of any natural disaster anywhere on the globe.

If Nigeria builds a reputation for herself as a country that never does things right, then she risks sharing the fate of the disgraced old man who has many grandchildren but goes to the river to fetch his own water. Why were they expecting that Obama would choose Nigeria over any other country on his first visit to West Africa? Well, we haven't quite explored the concept of Black Supremacy the way we abhor the white version; otherwise, we should be quick to condemn the Nigerian position on Obama's preference for Ghana as a very flawed prognosis. The question shouldn't arise. They would soon realise that numbers on their own do not count; it is the people that make them count. And until the people who form the numbers make themselves count, nothing will count towards their dignity and self-worth. But in making things count, often certain things will not count. If the Americans were interested in size and numbers alone, then Obama would have stayed in Washington or perhaps make it to China, to strengthen important trade ties.

So, what do Ghanaians hope to gain from the Obama visit? Gabby Otchere-Darko has done a phenomenal job on 'What's in it for us and US.' He writes: “The Obama trip reinforces the extent of US strategic interest in the country. Ghana has become an object of international desire between the two super powers of the 21st Century-America and China-and the Americans are in no mood to lose its 'trusted partner' to the Chinese.” Elsewhere, he adds: “Ghana has all the vital statistics and the morphological features of a natural ally. We have the oil reserves, we are in the stable centre of the New Gulf and we have the military discipline and stable atmosphere to make us the perfect hosts for America's first major military migration on our continent.”

Compare Otchere-Darko's Ode to Ghana with the Dirge sung by the Publicity Secretary of the Action Congress of Nigeria, Lai Mohammad: “The message should be clear to our leaders that it is not your population, the size of your territory, your richness in mineral resources or your claim to being a giant that the world is interested in. It is good governance, purposeful leadership arising from free and fair elections, zero tolerance for corruption and continuous strengthening of democracy, which are apparent in Ghana but alien to Nigeria.” The Publicity Secretary stopped short of saying that Nigeria is a failed state, but a careful read seems to paint a picture of the façade that the Nigerian people have lived with for so long. This Day columnist Omololu Ogunmade also adds: “If Obama had run in Nigeria, even his world-acclaimed campaign, he might not have won even a council election. Voters don't count here; vote counters do.”

Even so, Nigerians are a proud, intelligent people. Pick any Nigerian newspaper and you would marvel why a country blessed with so much creativity and entrepreneurial talent would make a mess of her democracy. Or, maybe their democracy is not in such a mess. Vice President John Mahama returned from Abuja only a few days ago, to join Nigeria celebrate ten years of continued, uninterrupted democratic rule. That tells you that the people are proud of their current state of affairs. It is not clear if Soyinka participated in the celebrations; he would rather they stopped behaving like the chichidodo.