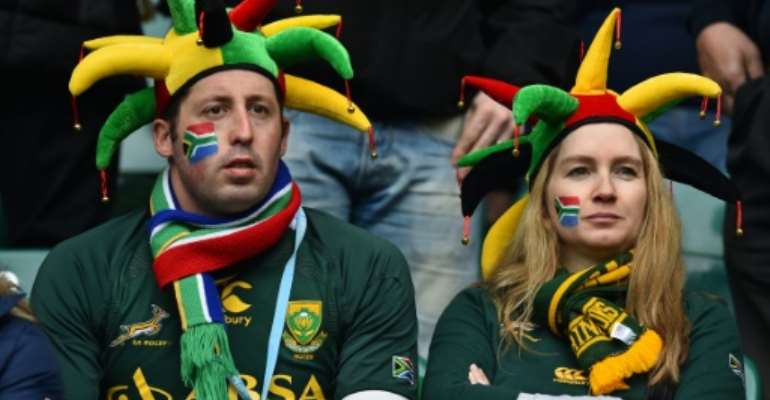 South Africa face a new-look Italy XV in Florence on Saturday a week after a first loss to England since 1996 heaped further pressure on embattled coach Allister Coetzee. By Ben Stansall (AFP/File)

Milan (AFP) - An improved overall performance will be crucial for South Africa as a wounded 'Boks look to make amends for their first defeat to England in a decade against Italy, says forwards coach Johan van Graan.

South Africa face a new-look Italy XV in Florence on Saturday a week after a first loss to England since 1996 heaped further pressure on embattled coach Allister Coetzee.

With 12 wins from their 12 previous meetings with the Azzurri, the 'Boks will line up with confidence.

But van Graan said: "We need to improve overall and the players are working unbelievably hard during the week and at training.

"Against England our set-pieces were again very good and we created six clear cut scoring opportunities from our set piece, and converted four of those into points on the board.

"But, as I said, we must improve in other areas as well. I think our scrumming against England was probably the best in the past five years or so, and our line-outs functioned well too."

The scrum and set pieces are Italy's traditional strong points, but fans were left with plenty of questions after a crushing 68-10 defeat to the All Blacks marred Conor O'Shea's maiden home game in charge.

O'Shea insisted putting points on the board is not the priority as he begins a four-year term confident he can lay solid foundations for the future.

That won't rule out a home display filled with "pride and passion", said van Graan as the Azzurri look to show last week's heavy reverse was a blip.

"Italy will be a tough opponent at home, playing with a lot of pride and passion and they will be looking for an improved performance against the Springboks," added van Graan.

"We want to be technically and tactically better against a side that is playing at home and eager to show improvement."

South Africa will be without lock Eben Etzebeth due to concussion suffered in a clash of heads against England, although the visitors could welcome Bryan Habana back to the fold.

Habana, who did not play against England, had a full run at training on Monday and he will be available for selection, according to head coach Allister Coetzee.

Meanwhile, flanker Uzair Cassiem joined the squad on Sunday in Italy as replacement for Roelof Smit.

The Springbok team to play against Italy will be named on Thursday and inside centre Damian De Allende believes they are ready to step up.

"From a team perspective, we know we can play much better but the guys are not lacking in effort," he said Tuesday.

"We keep on working hard and believe in our process, and if we can improve on our execution then the result will look after itself.

"If you look at the last part of the England match then you will see we created chances and scored, and that is what we must do on a more consistent basis."