Ghanaian youth have right to dialogue with Presidency-Mills 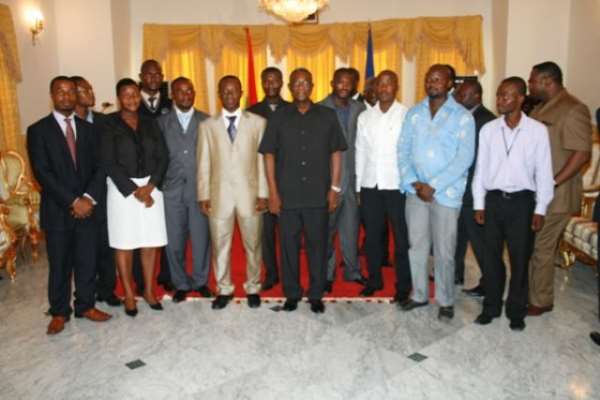 Accra, June 2, GNA - President John Evans Atta Mills on Tuesday extended an open arm to the youth of Ghana, to feel free to interact and team up with Government to propel higher, the national development drive.

He said Government would continue to regard the youth of Ghana as important partners in national development, and pointed out that a visit and dialogue with the Presidency by the National Union of Ghana Students (NUGS) was a right rather than a privilege.

The President was reacting to a statement by Mr Ishmael Chinebuah - Kodua, President of the NUGS, who led a delegation of the Executives of the Union, to pay a courtesy call on him at the Osu Castle.

Mr Chinebuah- Kodua, in his introductory remark registered the gratefulness of the Union to the Mills Administration for making the Castle accessible to the Union; something he said had not been so in former times.

President Mills, who is also a former don at the University of Ghana, said he had always loved to interact with the NUGS, and extolled the worth of Ghana's youth, which had enormous exuberance, with profound intellectual capacity that could be explored for national development.

President Mills urged the youth to emulate the good qualities of the older generation, and imbibe the virtues of honesty, openness, humility, tolerance and love for one another as the nation strive to ensure a better life for all its citizens.

He said the youth should not allow themselves to be manipulated by political leaders, who had no genuine love for the nation.

They should rather take lessons that would make them effective leaders when they assumed the mantle of leadership.

President Mills urged politicians to teach the youth to do the right thing, adding that the changes in the nation's higher educational system had become necessary to respond to the exigencies of the moment, to be abreast with the development needs of the time.

He reiterated Government's determination to ensure that the youth were given quality education to the development of human resources.

"Thanks for the visit, we'll welcome you and talk to you and together we'll build a better Ghana," President Mills said, and called for regular interactions between Government and the Union.

Communications Minister, Mr Haruna Iddrisu said Government was operating strictly under the rule of law, and invited the Union to criticize the Government when necessary, but in a manner that was civil and decent.

Mr Iddrisu announced that President Mills, out of deep concern for the number of qualified applicants who did not gain admission to both private and public tertiary institutions, would conduct a "needs test" with a view to improve on the Student Loan Scheme, under a formula of the Ghana Education Trust Fund (GETFUND).

Also, an amount of GHc 12 million would be made available this year under the GETFUND to support the Students' Loan Trust.

Mr Iddrisu condemned the get-rich quick attitude among a section of the youth through Internet scams.

He announced that as part of Government's effort to cyber security, a Bill would soon be introduced in Parliament, while a Cyber Security Centre would also be established.

Mr Chinebuah- Koduah complained about the frequent changes of the duration of the nation's post primary education calendar, stating that there have been 13 reforms since 1963, adding that Ghanaian education had often been bookish examination centred, and with the Examination Council holding students at ransom with frequent cancellation of examinations.

He however expressed gratitude to government for providing temporary offices for the NUGS, and appealed for the provision of a permanent office complex.