3 Killed as Mills embarrassed over Bawku 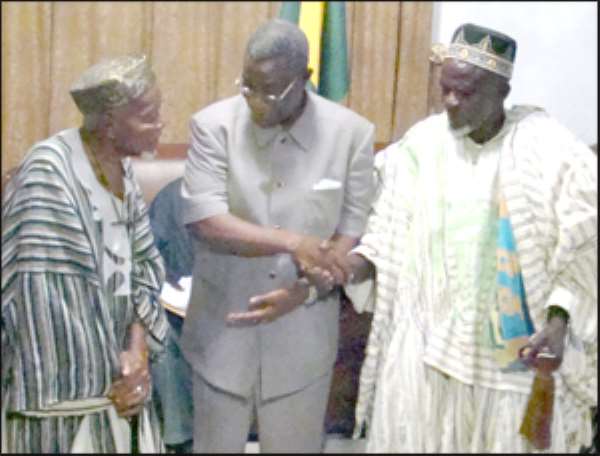 DAILY GUIDE has learnt from Presidential Spokesperson, Mahama Ayariga, an indigene of the area, that the President had been shattered by the reports of the latest killings in the conflict-prone area.

President Mills' embarrassment was justifiable, having gone down in the history of the country as the first head of state to undertake the clergy's task of directly praying for God's intervention in the face of a major challenge.

Less than 24 hours after President Mills left the Upper East region, the combatants reached out for their arsenals, leading to the killing of not less than three people, in addition to the burning of four vehicles and a number of houses, including the office of the Ghana Immigration Service in Palmakon in the town.

The President had prayed, thus, when he hosted two principal traditional authorities in the seemingly unending strife: “Father, you are God of truth. You are God of unity. Father, we pray that you will be present in our deliberations.

Father, soften all hearts and minds. Let us be one another's keeper so that at the end of the day, we give you glory. Father help us also to reach an amicable settlement.

“You alone want prosperity for your people. You want progress and not violence. So Father, soften our hearts so that at the end of the day, we can see which way we should go, and use us to glorify your holy name. Amen”.

The smiles on the countenance of the President were short-lived because soon after his peace-broking meeting with the opinion leaders and others, there was a resurgence of violence, as though his intercession was responsible for the unfortunate development.

The Presidential Spokesman who had earlier praised his boss' feat for brokering peace in this border town, made an about-turn following the resurgence when he said the President was embarrassed by the development.

The Presidential image-maker, before the violence, had described as historic, Mills' feat of bringing the Mamprusi chief and the Bawku Naba, a Kusasi, together under one roof to discuss how to ensure peace.

During the said historic meeting, which was thought to have sealed the incessant scenes of inter-ethnic conflicts, President Mills entreated all concerned about the need to support the peace effort, as this is a pre-requisite for development.

Many Ghanaians did not find the spectacle of the two personalities who appear to hold the key to the peace in Bawku as particularly refreshing.

Even as the President enforced the handshaking segment of the encounter, one of them, as the pictures showed, appeared to be looking away from his counterpart.

“That was enough to show that it is not yet peace in Bawku,” one curious person told DAILY GUIDE.

On Sunday afternoon, a popular Moshi young man was shot and killed in Bawku, following which Mamprusis went on a revenge attack.

The military and police action averted what could have been worse than what was reported in the media yesterday. However, by press time yesterday, the death toll was three.

The Deputy Commissioner of Police in-charge of the Upper East Region, Alhaji Hamidu, told the media a day after the incident that there was an underlying factor beyond the ethnic one responsible for the resurgence of violence in Bawku.

He however fell short of giving details due to, as he put it, security reasons.

An extended curfew has been slapped on the town as the security agencies maintain law and order.

There is an uneasy calm in the town where the Regional Commander pointed out hosts all manner of dubious characters who cash in on the already bad security situation there.

The Interior Minister, Cletus Avorka, has however pointed out at the release from custody, some suspects arrested over their alleged role in the murder of a woman.

Soon after their release on bail, relatives of the suspects began drumming and dancing, thus attracting the ire of the family of the murdered woman.

A clash ensued, the Minister said, adding that had the release on bail not been authorized, what happened might not have happened.

He called for the complementing of roles by the judiciary, police and others in the search for peace in the conflict-zone.