Road tolls to be increased 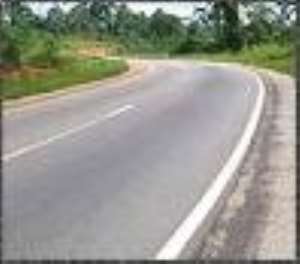 Accra May 27, GNA- Mr. Joe Gidisu, Minister of Roads and Highways on Wednesday said the Ministry was submitting to cabinet a proposal to increase road tolls as well as for other roads to be tolled.

The proposal would also be put before Parliament for consideration as soon as it received the needed attention, he said.

The Minister gave the hint at a press briefing on recent trade and investment missions to China a fortnight ago. The Minister led a 30- member delegation including members of Association of Road Contractors of Ghana (ASROC) and some officials of the ministry to Beijing and Shangai in China three weeks ago.

Mr Gidisu acknowledged that the country needed more money to maintain as well as construct road to other foodstuff centres in the country.

The Minister, who was answering questions on the state of the country's toll booths, admitted that there were leakages in toll collection, adding that, tolls booths were now being automated to reverse the trend.

“In addition, the stock of vehicles that pass through the toll booth were being taken to reconcile the tickets sold out,” Mr Gidisu said.

“This, we hope would check the leakage in the system”.

Mr Gidisu said the delegation met with the President of the China Export Import Bank, (China Eximbank) Mr Li Ruogu in Beijing and he (Mr Gidisu) made it known that government had planned to invest approximately US 800 million in the maintenance and rehabilitation of the country's 67, 189 kilometres of roads and bridges over the next four years.

According to the Minister the annual investment portfolio required for the maintenance of roads and bridges in Ghana was 200 million US Dollars.

Mr Gidisu said to achieve the road sector agenda, there was the need to improve and enhance the country's contractor capacity as well as providing them with reliable and adequate road construction equipment.

“It is against that backdrop that government lends its support to private sector initiatives such as the one being undertaken by ASROC.”

He described the meeting with the bank as fruitful, adding the bank was ready to provide the credit facility because it regarded the development of roads and bridges as a viable area.

Describing China as a global role model in socio-economic and technological development for the developing world and beyond, the Minister urged local contractors to emulate their activities, especially in the development of the road sector.

Mr Gidisu recalled the meeting the delegation had with the Chinese Minister of Transport, saying it focused on the possibility of government of China providing Ghana with funds on concessionary terms to procure Chinese made road construction equipment that would be allocated to members of ASROC and other contractors.

According to him, a Memorandum of Understanding in that respect was being effected, so as to support human capacity development of engineers, planners and other allied professionals in Ghana.

Mr. Twumasi Mensah, the National Chairman of ASROC said the association hoped to equip 10 road contractors in each region with the Chinese support.

He was optimistic that ASROC would receive the first batch of equipment by the end of the year.

Mr Twumasi stressed the need for government to ensure effective road toll collection for road maintenance since tolls should be paid by all.