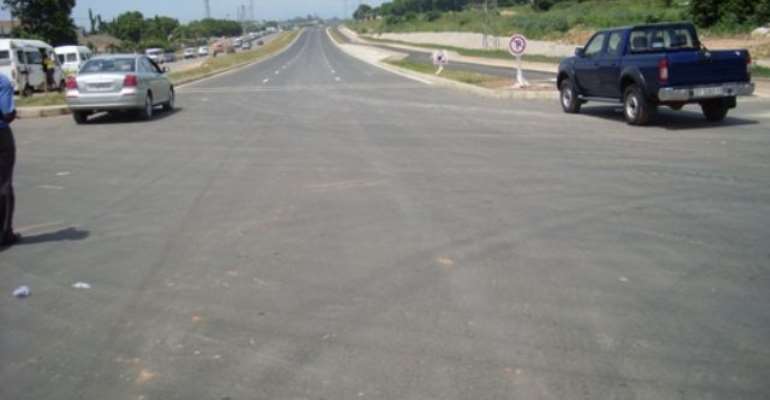 Accra, May 22, GNA – The Okponglo stretch of the Tetteh Quarshie–Madina Road would be opened to traffic at 0600 hours on Saturday May 22 2009.

The opening of the road was as a result of an appeal the Ministry of Roads and Highways made to Sonitra, the construction firm, to ease the traffic congestion.

The Minister of Roads and Highways, Mr Joe Gidisu on Friday led a team of Engineers and the Media to inspect that stretch for onward handing over to the Ministry.

Mr Gidisu after the inspection said he was satisfied with the work done and all the arrangements the Motor Traffic and Transport Unit (MTTU) of the Ghana Police had put in place for the effective use of the road.

He urged other stakeholders to follow all the necessary directives when using the two-kilometre three-lane dual carriage road to meet the development aspirations of Ghanaians rather than turning it into an accident-prone zone.

Mr Gidisu told all motorists to keep to the 50-kilometre per hour speed limit to avoid needless accidents and charged the Police and other law enforcement agencies to rigorously enforce traffic laws by punishing all offenders.

“This asset will amount to nothing if drivers, pedestrians and other road users do not heed traffic rules," he noted.

He told the Police not to allow the road to be taken over by hawkers and mobile phone unit vendors, describing their presence on the roads as a nuisance.

The Commander of MTTU, Assistant Commissioner of Police (ACP) Daniel Avorgah said the Police would enforce the traffic laws and prosecute offenders.

He said for effective traffic control, motorists going to Legon, Madina, Adenta and beyond would still use the Emmanuel Eye Clinic Diversion from 0600 hours to 1400 hours.

ACP Avorgah said the new stretch would be opened for use between 1400 hours and 0600 hours.

He explained that vehicular traffic to Legon, Madina and beyond becomes heavy on the Secaps Hotel-Tetteh Quarshie portion after 1400 hours and that opening the road at that time would reduce the stress motorists go through.

ACP Avorgah advised drivers to drive with caution and to keep within the speed limit of 50 kilometres per hour, especially in the night since there were no streetlights on the road, adding that at that speed, drivers would be able to control emergency situations when they were crossed by pedestrians.

"Even if the worse happens and a car happens to knock someone the impact will not be great so as to cause the death of the person," he said.

He said if drivers were able to follow these instructions accidents would be minimized considerably.

He advised drivers to use the weekend to practise until Tuesday when the road takes its full traffic load.

ACP Avorgah gave the assurance that the Police were very ready to check overloading; speeding and all forms of reckless driving.

The Resident Engineer of Ghana Highway Authority, Mr Ebenezer Gyampo said the road could last for more than 50 years before any major intervention in terms of repairs might begin on it.

He, however, said overloading could put a stress on the road and reduce its lifespan drastically.

He called on the Police to check overloading, speeding and reckless driving.

The Project Manager for Sonitra, Dr Richard Kwofie said the project would be fully completed in December 2010.