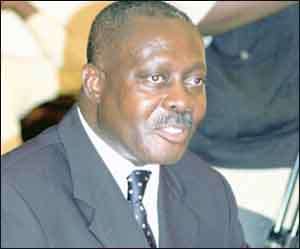 Akwasi Osei-Adjei DAILY GUIDE has gathered that the about 44 Ghanaians and 9 other African nationals who were reportedly murdered in Gambia in 2005 were mistaken for a band of mercenaries that had sneaked into the country to oust Gambian President Yahya Jammeh through guerrilla warfare.

A Ghanaian who managed to escape after he was bundled alongside those that were murdered had narrated an eye-witness account of the bloody ordeal and is insisting that the dead were actually killed in Gambia but not murdered elsewhere and dumped in the country as was being alleged by the Gambian authorities.

Ghana's former Foreign Minister, Akwasi Osei-Adjei, disclosed this in an exclusive interview with DAILY GUIDE , and indicted President Jammeh of deliberately thwarting painstaking efforts at reaching an amicable settlement on the matter saying that this lack of cooperation from the Gambian President had created an erroneous impression that Ghana was relaxed over the murder of its citizens.

He said one of the reasons why Yayah Jammeh is opposed to investigating the issue is that the opposition parties in Gambia have accused him of having personally ordered the said killings and he fears that it would be used in dragging him to the human rights courts.

He said though Ghana has never considered going to war with Gambia over the issue, it was clear that all diplomatic means in solving the issue have been exhausted and the only option left is to drag Gambia to the International Court of Justice in the Hague.

Mr. Osei-Adjei said the Gambian government has turned down repeated proposals from the New Patriotic Party (NPP)-led government that the buried corpses should be exhumed and brought to Ghana and compensation paid to the bereaved families.

He explained that though the Gambian officials on the negotiation team admitted the proposal was a novelty, they confessed that Yahya Jammeh would not take it kindly and that they could not relay the information to him.

“There was a time our Gambian counterparts agreed that our recommendation was a novelty but they asked me, 'who was going to tell the big boss?'...When we first went to Gambia over this issue, the bodies were still in the morgue but when they realised we were getting closer to the end of the case, the Gambians quickly buried them without our approval or consent and we were very unhappy about that.

Osei-Adjei said recent reports in the media that the African Union and the United Nations had directed that the bodies should be brought to Ghana was nothing new and that Gambia had over the years turned down the same request from Ghana.

“The report that we have now is just an advisory recommendation that does not indict them in any way; it is just arbitration and that is why it did not say who killed the Ghanaians and who gave instructions for them to be killed... the content is the same thing that we gave to them which they turned down,” Osei-Adjei noted.

The former Minister said a Ghanaian national who was with the murdered souls has disclosed to the Ghana government that they arrived in Gambia in a hired boat from Senegal and that they were to join a bigger ship that was on its way to Europe but was waiting for them on the Gambia territorial waters because it was too big to dock in either Senegal or Gambia.

The escapee reportedly disclosed that when they reached Gambia, the leader of the group pretended he was receiving a phone call but never came back and that after some hours, the owner of the boat said the hours for which he was hired had expired so he left back to Senegal.

Osei-Adjei narrated: “As they were waiting, unknown to them, the Gambian authorities had picked signals that some mercenaries would be arriving from Senegal to overthrow Yayah Jammeh....The group again chartered another canoe to take them to the high sea but unknown to them, the owner of this second boat is also a security officer so he quickly called for re-enforcement and got them arrested and taken to a warehouse.

“The Gambian authorities then came for them in groups of four at a time and took them away in a pick-up vehicle till eventually one heavily built Nigerian among them suggested that since those that had been taken away were not being brought back, it was possible they were being murdered so those who can should run for their lives and that he was ready to fight them.”

The former Minister said when the officials came for another set and had gone mid-way, the Nigerian engaged them in a fight till he was shot but that paved way for some of the victims to escape and that was how the Ghanaian survivor managed to escape till he found his way back to Senegal.