Another approach to waste management in Ghana 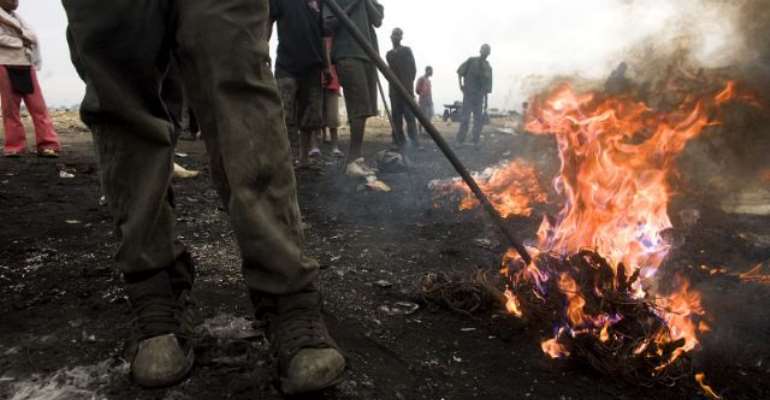 Another approach to waste management in Ghana

His Excellency The President, Professor John Evans Atta-Mills has since his inauguration as President, being insisting on the reduction in Government expenditure.

He has also pledged that to ensure that the country is clean by the first 100 days. We have also heard of so much money that is allegedly spent on waste management by the Accra, Kumasi Metropolitan Assemblies and other municipal and district assemblies.

There are various factors elements involved in the effort to keep the country clean. These are:-

*The regulatory frame work that guides the implementation of bye-laws on waste management by the various MMDAs because this will let the world know what the responsibilities of the Assemblies are and what that of the citizenry is.

*How to keep costs down in the effort to clear the country of the enormous amounts of waste.

*The cross application of large sums of money that the Ministry of Health says is used in malaria prevention programs.

*The cross application of human resource from the prisons in Ghana to help in the fight against waste and filth.

*Design of a systematic, conscious and sustainable cost effective waste management program to run first on a pilot for 8 weeks and then responsibility transferred gradually to the citizenry with the application of the bye-laws as a deterrent.

This paper is to try and fashion out a new approach to waste management that may appear to be revolutionary and probably out of the accepted normal scheme of doing things. This will involve the amending of the Ghana Prison Custodial Rules and also the Government's Financial Regulations to enable the use of some resources from the Ghana Prisons Service and the Ministry of Finance & Economic Planning.

Based on this proposal, it is envisaged that Government should be able to authorize the use prisoners to engage in a "very regular and massive" cleaning exercise continuously for about three months. This will involve Government engaging with the management of the Ghana Prisons Service to find out how far the regulations of the Service can be amended to allow for the use of prison labor especially in the nights to desilt the drains and clean the street-side drains all over the country.

The use of prison labor arises from the fact that in a small way this will help decongest the already crowded prisons. There is also the issue of poor feeding and other facilities arising from the limited budgetary allocations by Government. Monies that will accrue from the use of this labor should go a long way to ease some of the problems of feeding, etc.

There is the issue of rehabilitation of prisoners which the Ghana Prisons Service constantly says it needs support to carry out. Rehabilitation involves the physical and the psychological and the use of prison labor for this project will give an opportunity for the expected rehabilitation for the persons committed to prison.

The proposal is to use about a 1,000 prisons each day in two shifts in each regional capital and under the appropriate security cover to remove the waste and silt that have choked the drains all over the country.

During the day, the work force could be engaged in the clearing of weeds along the drains and other similar areas This exercise should be stretched to cover 60 days of continuous work both day and night to effect a clean environment and also to subtly enforce the bye-laws of the MMDA's.

The rationale is that whiles the exercise is on, the presence of the workers and the security personnel would be a deterrent to would be litterers and that could become a habit after the exercise is over since the management of the exercise would involve the unit committee members.

Civil society will be reminded and individuals held responsible for littering. Landlords and owners of other properties should be made responsible for keeping their properties and immediate environs clean. Owners of undeveloped plots of land should keep them weed free every three months.

The potential fear of escape of the prisoners does not arise because the prison authorities themselves know that most prisoners who 'escape' are usually those whose time is running out and 'they want a way of coming back' to the prisons. The number of possible escapees is likely be very low and compared to the benefits negligible. In addition because usually the number of persons to be released every month is not very high and 'escapism' is likely to be relatively low.

Civil society organizations should carefully analyse and evaluate the positive effects of this proposal and make appropriate suggestions as to how best the objective can be achieved. Many other countries like Singapore and the peoples' Republic of China use prison labor for social improvement without infringing on the rights of the prisoners.

This is because it is the courts that sentence people to terms including "imprisonment with hard labor"(IHL). The belief is that if a person is sentenced to a term with hard labor, then the Government can use the labor pool so created to carry out any assignment insofar as the life of the prisoner is not endangered.

Secondly, it will also provide an opportunity for reasonable labor charges to be paid by the waste management companies to quickly rid the country of the filth. These charges will obviously be paid to the Ghana Prisons Service to improve upon their finances to enable them do a few things.

Thirdly, it will provide an opportunity for the interaction between the prisoners and the outside society on a very regular basis over a period and perhaps help to change perceptions about prisoners and prisons. Fourthly, there is the economic fallout from which food vendors and other services providers will benefit.

The other aspect of amending the financial regulations has to do with enabling Government to be able to vary the use of the malaria prevention fund to hire more labor to keep the environment clean and also to provide chemicals to disinfect the various drains, bushes and garbage dumps to keep mosquitoes and other insects away.

There was an attempt by a medical officer in one of the national dailies that sort to say that the mosquitoes that transmit malaria do not thrive in stagnant waters and dirty environments. Before then Dr. Kofi Ahmed had published in the daily Graphic an article on the 'MOSQUITO ACT OF 1911'.

In the article, Dr. Ahmed brought to light, the circumstances that led to the establishment of the Sanitary Inspector popularly known as 'saman sama'. These were the people who ensured that the environment was kept clean.

In the article Dr. Ahmed enumerated the checklist by which the Sanitary Inspector carried out their functions. That law is still on the statutes and with the daunting challenges facing the country in waste management and its subsequent effects on productivity through reduced health, it is necessary that the MOSQUITO ACT OF 1911 should be enforced.

In as much as the modern trend is to attempt to educate the public, there must also be a monitoring aspect that should tell how effective the education is doing.

The attitude of the people is the best indicator of the effectiveness of public education. Prolonged and continuous public education turns to be unproductive because it either means the method used is wrong and so the 'students' do not understand, or the 'students' are just not interested in what is being taught.

So much public money has gone into these education programs without much results; so why do not we take another look at the system that will provide the desired results?

The Ministry of Health (at least under the last Government is on record to have being spending the colossal sum of $770million per year to prosecute a program on malaria prevention (since 2002). Half of this amount per year could engage sufficient labor, chemicals and equipment to rid the nation of mosquitoes, other insects and rodents. This same amount will support an attitudinal change through public enlightenment and also ensure that the law is enforced.

Fuel price increases: Akufo-Addo, Bawumia callous about the ...
25 minutes ago

Cape Coast Airport will be constructed at all cost - Akufo-A...
25 minutes ago