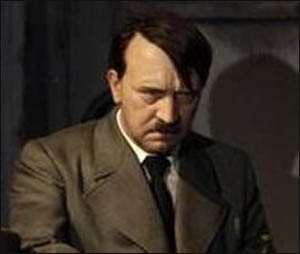 Adolf Hitler A German court fined an unemployed man 900 euros ($1,227) Tuesday for knocking the head off a waxwork figure of Adolf Hitler in a Berlin museum.

Minutes after the Madame Tussauds museum opened in the German capital in July, the 42-year-old pushed past security staff ripped off its head. The man, an ex-policeman, said he found it inappropriate to display an exhibit showing the Nazi leader only some 500 meters from Berlin's Holocaust memorial.

The waxwork of a glum-looking Hitler in a mock bunker stirred debate in Germany even before it went on display. Critics argued it was tasteless to display a replica of the man who unleashed World War Two and ordered the extermination of Europe's Jews.

Madame Tussauds said the museum avoided politics, arguing Hitler stood for a significant part of German history and his waxwork therefore had a legitimate part in the exhibition.