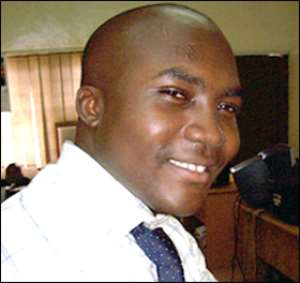 Yaro Kasambata Yaro Kasambata, a presenter of Metro TV's Good Morning Ghana show and an aide to Vice-President John Dramani Mahama, is in trouble over an alleged GH¢1,800 deal at the Ministry of Water Resources, Works and Housing.

Mr. Kasambata was reported to have ruffled feathers and unnerved senior officials at the said ministry when he presented an invoice of GH¢1,800 and demanded that he be paid the amount as the cost of some media work he was recently contracted to do for the ministry, making mockery of the austerity measures declared by President Atta Mills.

The amount was said to have been used in 'taking care' of some selected journalists, in what is known in media parlance as 'soli'.

Yaro was said to have been engaged by the sector Minister, Albert Abongo to organise 'friendly' media houses to cover his recent inspection of some government bungalows that used to house officials of the past administration.

Yaro, who recently announced himself as media aide to Vice President John Mahama, in a quest to get the money from the Ministry, reportedly explained that he was specially tasked to coordinate some selected journalists to give media coverage for the said inspection and that since he had successfully done that, he ought to be paid the cost of the co-ordination.

Sources at the minister's office told DAILY GUIDE that the Metro TV presenter subsequently submitted a GH¢1,800 bill to Mr Abongo for approval.

Top officials at the ministry were reportedly vexed over the issue, questioning the basis on which Mr. Kasambata was contracted to do the job, especially when the ministry had staff that could have carried out the task with minimum cost, especially in this era of lean government and austerity measures.

Sources at the minister's office who revealed the hitherto secret deal to DAILY GUIDE, said the figure presented by Mr. Kasambata was rather on the high side considering the number of selected journalists who went on the tour with the minister and his deputy, Dr. Hanna Bissiw.

When DAILY GUIDE called Mr. Kasambata on phone to get his side of the story yesterday, he said he had no comments to give on the issue because he was asked to do a job for the ministry and he had done it successfully.

Mr. Kasambata, who in recent times had spoken to the media on behalf of Vice-President Mahama, said DAILY GUIDE was speaking to the wrong person because he was asked to organise some media friends to give coverage for the said programme and that was exactly what he did.

The precise number of journalists that attended the said inspection tour and how much was spent on each was not yet clear but the exercise received broadcast and print coverage from media houses.

DAILY GUIDE gathered further that a number of media practitioners were throwing their weights about at several other ministries and had titled themselves as 'aides' of ministers and deputy ministers of the current administration, positions President Atta Mills said did not exist.

They operate at the expense of the tax payer and have government vehicles and other facilities at their disposal.

The duty and responsibility of these 'aides' is precisely that of the 'special assistants' who wandered the corridors of ministers who served under the New Patriotic Party (NPP)-led government.

Though President John Atta Mills had publicly claimed that his government would not tolerate the activities of special assistants at the ministries because they brought additional and equally unnecessary costs to government, it is clear that the new government has only replaced these special assistants with 'special aides'.