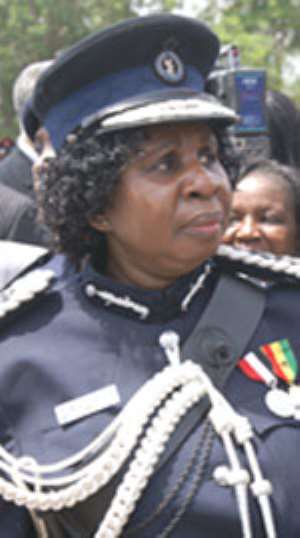 They have all pleaded not guilty to the charges, but the court refused them bail and remanded them into police custody to re-appear on May 19, 2009. Mr. Adjei-Lartey, counsel for the first three accused persons, told that court that his clients were framed up for a crime they did not commit.

Giving the facts of the case before the court, the Prosecutor, ASP George Abavelim, noted that in the middle of April, 2009, Peprah and Agyemang Duah approached Danjuman with a request to help them purchase cocaine, which the latter agreed to do.

The prosecutor indicated that Danjuman subsequently contacted Agbaglo, and both agreed to provide the substance. ASP Abavelim told the court that Agbaglo and Danjuman then assured Peprah and Agyemang Duah that they could provide them with the narcotic drug, which they subsequently did, but the substance, which is yet to be identified, had been parceled into two small cassette-sized-packs and cellotaped tightly.

According to the prosecutor, Agbaglo and Danjuman then alerted the two police officers at the CID headquarters of their intention, and the location at which they would be meeting for the transaction.

The prosecutor held that on April 28, 2009, Agbaglo and Danjuman met in the room of Agyeman Duah at Nii Boi Town, where the transaction was to take place.

“Accused John Peprah, who is the one buying the drug, was there with Eric Agyemang together with Francis Kofi Obeng,” the prosecutor told the court. ASP Abavelim noted that an amount of $90,000, brought for the purchase of the item, was produced by Peprah, while Agbaglo brought out the two parceled substances as D/L/Cpl. Amuzu, leading a team of policemen from the CID headquarters, entered the room and arrested them, as was pre-arranged.

The prosecutor then told the court that the parceled substance, being presented as the cocaine, was retrieved and brought together with the arrested persons to the CID headquarters, while Agbaglo managed to leave the scene with the monies he had received for the cocaine.

The prosecutor further told the court that Agbaglo later called on ASP Kuadey, and gave him $15,000 as the share of the policemen who took part in the exercise.

ASP Abavelim noted that during intensive investigations at the CID headquarters, the true facts of the transaction were established.

He told the court that as Peprah, Agyemang and Obeng insisted that they were buying gold and not cocaine, Agbaglo also maintained that the transaction was for the purchase of cocaine, as a result of which he alerted the police. Agbaglo also denied receiving $90,000 from the buyers.