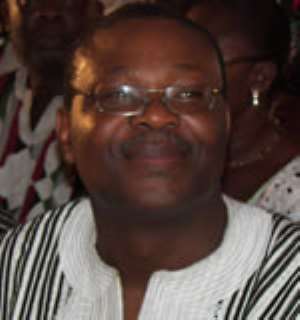 Politicians from the Andani and Abudu gates of the Dagbon kingdom have once again been blamed for the absence of peace in the area.

The Executive Director of the West African Network for Peace-Building (WANEP), Mr Emmanuel Bombande, who made the point, therefore, proposed the estab­lishment of another level of dialogue that would engage key politicians from the two gates to supplement the efforts of the Commit­tee of Eminent Chiefs chaired by the Asante­hene, Otumfuo Osei Tutu II.

According to him, this level of dialogue was crucial, since it was the politicians who influenced the various positions advanced by the chiefs from the two gates during their meetings at Manhyia.

In an interview with the Daily Graphic, Mr Bombande expressed optimism that the dia­logue among the politicians would serve as a second tier to the ongoing mediation between chiefs of the two gates, which was being facil­itated by the Committee of Eminent Chiefs.

"Politicians from both the Andani and Abudu gates must sit face to face and look at each other, eyeball to eyeball, ask themselves what was it that was keeping them divided and agree on a way forward," he stated.

The conflict resolution expert explained that the only way to guarantee sustainable peace in Dagbon was to build mutual trust between the two families, adding that "it is the politicians who have the capacity to work with and influence the traditional leaders to build this type of mutual trust."

"In fact, we cannot continue to pretend that the politicians were not part of the traditional matters when indeed they are the main players behind the scenes," he emphasised.

Mr Bombande said when the politicians were able to have mutual discussions and trashed out their differences, the implementa­tion of the load map to peace in Dagbon, which was agreed by chiefs of the two gates through the Otumfuo-led committee, would progress.

It would be recalled that the implementa­tion of the road map hit a snag when the Andani and Abudu families failed to agree on how the funeral of the late Naa Mahamadu Abdulai should be performed.

This was after the burial of the late Ya-Naa Yakubu Andani, and the subsequent instal­lation of the Kampa-Kuya Naa as the regent.

"At this stage, the politicians must put aside all the obstacles preventing the full implementation of the road map and have frank discussions on how to overcome such challenges,'' Mr Bombande stated.

He, however, implored the politicians to take political party issues from the dialogue and tackle the matters frankly as citizens who were in search of peace.

"It wohld lead us nowhere if they use this p1atform to advance political interests 'other than seek the interest of Dagbon," he cau­tioned.

Mr Bombande further urged that whatever solution that would be reached must be long­-term, adding that "it was high time we halted the fire fighting method of tackling conflicts in Ghana".

In a related development, Rev Father Thaddeus Kuusah of the Northern Regional Peace Council has advised the government not to side with any of the families, since that could jeopardise the peace process.

"The only interest that the government must demonstrate in this matter is its desire for a lasting solution," he said.

The Rev. Father again mentioned that it was equally important that the two sides demonstrated their readiness to smoke the peace pipe otherwise all efforts being made to resolve the dispute would be in vain.