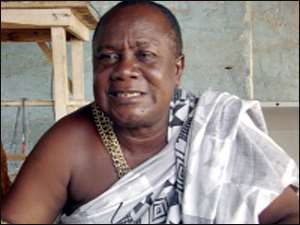 Nana Asibaa Kyere Mrosa DAILY GUIDE can confirm that 25 out of the 32 Assembly Members who are due to vote in today's elections to either confirm or reject the President's nominee for the district chief executive position for the Atebubu-Amantin District have been taken hostage at a secret camp in the Sunyani municipality.

The twenty-five Assembly members where reportedly brought to the Ebenezer Hotel in Sunyani on Monday by officials of the ruling NDC and had been in camp until this morning where they were released in order to take part in the elections scheduled later this afternoon.

Sources say they were camped in the hotel under the guise of protecting them from what party officials call attacks and threats from the traditional authorities.

When this  and other journalists yesterday afternoon visited the hotel, the MP for the Atebubu-Amantin Constituency, Owusu Manu, the Constituency Chairman of the NDC, George Kyere Mensah and the nominee, Sanja Nanja, were seen around at the hotel premises.

They told the reporters that the twenty-five assemblymen came there in their own volition to avoid being attacked by the traditional authorities.

They denied having sponsored the assembly members with the intention of bribing them with huge sums of money to vote for the nominee.

However, in an interaction with some of the encamped Assemblymen, they hinted DAILY GUIDE that they were brought to the hotel by the nominee but denied having been offered money to vote for him.

In a press conference yesterday, the Chief Linguist of the Atebubu Traditional Council, Nana Asibaa Kyere Mrosa, alleged that a group of Assembly Members from Atebubu-Amantin District, numbering about twenty-five have been camped at a hotel in Sunyani since Monday by the Regional Minister and some party officials to what he stated, as an attempt to offer each of them GH¢500 to vote in favour of the embattled President's nominee, Sanja Nanja, whose nomination the chiefs have kicked against.

Nana Asibaa Mrosa further alleged that the Regional Minister, Kwadwo Nyamekye-Marfo, in connivance with the District Coordinating Director for Atebubu, had withdrawn some unspecified huge amount of money from the Assembly's coffers in the Adum Branch of ADB to be shared among the encamped Assemblymen and the District Electoral Commission in order to rig today's election.

“The people of Atebubu-Amantin are entertaining the fears that part of the fund will be used to defray the camping debt,” said Nana Mrosa. “Our source within the encamped 25 assemblymen indicate that the Regional Minister met them at a meeting in the hotel around 10:30 am on Wednesday before leaving for Berekum with a promise to meet them this evening to give them GH¢500 each.”

According to Nana Mrosa, the Regional Minister and the party executives have planned to prevent some members of the assembly from observing the counting of the ballot papers through intimidation after the elections.

He further indicated that the “Regional Minister and the party executives in the region and the district have also planned to replace some of the government appointees whom they suspect of voting against the nominee during the first round.”

They have however vowed to disassociate themselves from the nominee in case the regional minister and the government use dubious means to confirm him.

Meanwhile, all efforts to get the regional minister, Kwadwo Nyamekye-Marfo, for his reaction proved futile. He refused to pick the calls of this reporter when he attempted to reach him on the phone. The phone was later switched off.