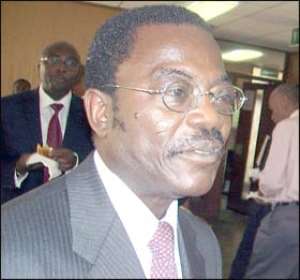 Dr Paul Acquah, Governor of BoG THE FOREIGN exchange policy of the country would be the major issue at stake as the Monetary Policy Committee (MPC) of the Bank of Ghana began its quarterly meeting yesterday to review the current economic outlook of the nation.

Last year, the Ghana cedi fell by 22.9 and 19.1 percent respectively against the US Dollar and the Euro and appreciated by 7.1 percent to the Pound Sterling.

Other issues that the team, led by Dr. Paul Acquah, Governor of the Central Bank, will discuss include whether to review the Prime Rate- the rate at which the Central Bank does its lending to universal banks.

Though analysts are calling for a downward adjustment in the rate to reduce the cost of borrowing from the banks and also boost activity on the stock market, it is unlikely that the Central Bank would review the rate downward for the next quarter. Presently, lending rates of banks hovers around 33 percent.

Inflation has also been surging since the beginning of the year, from 19.86 recorded in January 2008 to 20.53 percent in March- a situation that compelled the BoG to increase the prime rate to 18.5 percent from 17 percent in February.

The decision by the Bank of Ghana was intended  to mop up excess liquidity from the system but analysts and market watchers criticized the move, saying cost of doing business in the country was going to shoot up.

Some economic indicators such as the country's fiscal and trade deficits, the foreign exchange rates, and foreign reserves among many other important indicators that are expected to enhance the economic growth of the country, are also to be looked at by the committee.

The MPC will also announce the evaluation of the monetary policy of the country and therefore make the necessary projections for the next quarter of this year. In addition, it will also assess the business risk factors.

Afterwards, it will announce the assessment and projections made to the press through a media interaction.

Dr. Kofi Wampah, a former head of research a the West Africa Monetary Institute (WAMI) who was recently appointed by President John Evans Atta Mills as the First Deputy Governor of the Central Bank, would also play a key role in the meeting.

Analysts are expected to evaluate the Central Bank's assessment of the economy and thus suggest appropriate methods to the bank and the Ministry of Finance and Economic as well as other important bodies.

The suggestions are expected to help the country's quest to ensure a stable and vibrant economic environment where there will be adequate private sector participation.