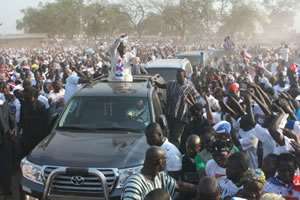 The Customs Excise and Preventive Service (CEPS) on Wednesday said its investigations have revealed that tax on a Toyota Land Cruiser belonging to Nana Akufo-Addo, former presidential candidate of the New Patriotic Party (NPP) in the 2008 elections, was undervalued.

The investigations revealed that the Landcruiser with registration GN 8104 Y was cleared together with three other Toyota Corolla Saloon vehicles. The Landcruiser was registered in the name of Mr Alex Tetevia, and transferred to Nana Akuffo Addo.

“Though depreciation was granted the importer, due to the state of the vehicle at the time of importation, some malfeasance has been established. Consequently, revenue has been lost to the state.”

CEP said it had therefore issued a demand notice to the agent of the importer, Fair Shipping Agencies Limited, for payment of the difference and penalty of GH¢17,760.02.

The statement noted that the officers who handled the transaction had been found to be negligent and disciplinary processes have begun to establish the extent of their culpability.