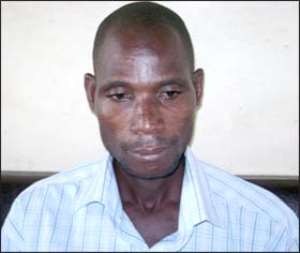 Osei Yaw Peter A WENCHI Magistrate Court yesterday granted bail to Osei Yaw Peter, the Assemblyman for Tapawolo, near Banda in the Tain Constituency, who has been in police custody for over ten days following his arrest on 17th April and subsequent remand in prison custody over his alleged involvement in an assault against the son of an NDC faithful at Banda-Sabiye.

He was however asked to re-appear on 14th of May alongside 14 others who were mentioned in the alleged attack.

Sources say the release of Osei Yaw Peter, whose arrest had been widely criticized by the people in the area as politically motivated, threw the entire community of Sabiye into a state of jubilation, amid drumming and dancing to welcome their 'hero'.

The released Assemblyman narrated his ordeal to DAILY GUIDE after spending several days in the police cells over an offence he denied any knowledge of.

He explained that the fateful day the alleged attack on the son of Alex Bonsu, a stalwart of the ruling NDC in the Tain Constituency who has been allegedly quoted as saying that he has the full backings of the security agencies to arrest and harass NPP supporters in the area, he the assemblyman was out of town.

Mr Osei Yaw pointed out to DAILY GUIDE that he was arrested at Wenchi with his cheque book and diary while attending to his private business after Mr. Bonsu pointed at him at a police barrier and asked the police personnel to effect his arrest.

He said the young man was rather overpowered by the inmate of the house and in his attempt to flee, some group of people beat him up.

This, he said, angered the father who called the police to arrest anybody in town suspected to be an NPP supporter which also led to his arrest.

He stated that Mr. Bonsu, after the NDC government attained power, had dragged more than four groups of people believed to have links with the opposition NPP to court, including the mother and family of the former MP for the area, Joe Danquah, for what they believed to be political vindictiveness.

However, Mr. Alex Bonsu, in an interview with this paper in reaction to recent media reports that have implicated him in the alleged harassments of NPP supporters in the Tain Constituency, denied ever masterminding any attack on an NPP member in the area.

He emphatically denied that he led a group of NDC thugs to attack one Yaw Obimpe, whom he described as a family member.

He said the NPP members, who are dominant in the area, were rather using their numbers to visit troubles on NDC faithful, especially his family, adding that he would rather use legitimate means to fight them instead of assaults that he had been wrongfully accused of.