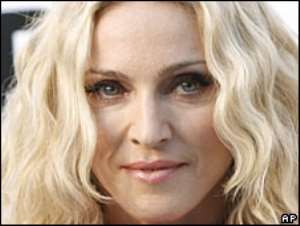 The man believed to be the father of the Malawian child who pop star Madonna wants to adopt has said that he opposes the move.

James Kambewa told a US TV station that he would be able to look after four year-old Chifundo "Mercy" James, even though he had never met her.

He said that he wanted the little girl to be raised "as a Malawian".

Madonna's appeal against a court ruling that denied her request to adopt the child is to be heard on Monday.

She has already adopted a boy, David, from Malawi.
'Capable'
Mr Kambewa told CBS television's "The Early Show" that he wore a necklace bearing his daughter's name around his neck, even though he had never seen her in person.

A spokeswoman for Madonna said that she did not know if Mr Kambewa was Mercy's father.

"All I know is that Mercy has been in an orphanage since the day she was born," Liz Rosenberg said.

Last month Madonna's application to adopt Mercy was rejected because of a requirement that prospective parents be resident in the southern African state for 18 to 24 months.