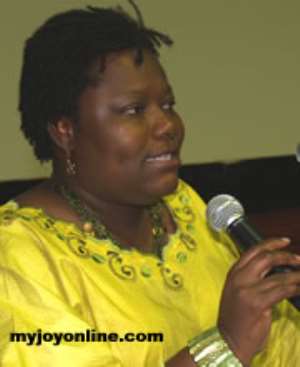 The Commonwealth Human Rights Initiative (CHRI) has presented a catalogue of serious violations of the rights of mental patients in some prayer camps in the Ashanti Region.

It said the camps employed inhuman methods such as chaining, beating and starving of mentally ill patients and forced them to eat "holy" sand for long periods of detention.

The findings were the result of a research into Access to Mental Health, in Ghana and how to prevent the human rights violations occurring in the region.

Presenting the report at the Miklin Hotel in Kumasi, Nana Oye Lithur, the Regional Co-ordinator of CHRI, said despite the shocking realities, families of patients still preferred the prayer camps because they were less expensive than psychiatric hospitals.

Moreover, she stated prayer camps were located far from where the patients' families live, because they want to keep them away from home.

To research the prayer camp activities, in March 2008 CHRl launched the Human Rights Research and Advocacy Project on Human Rights Violations in Prayer Camps and Access to Mental Health in Ghana.

The project primarily sought to conduct research into the operations of prayer camps and their compliance with human rights standards, identify specific human rights trends, reduce the number of mental health patients seeking treatment in prayer camps and advocate the passage of' the Mental Health Bill as a legislative framework to protect the rights of the mentally ill.

Surveys had already been conducted in the Greater Accra, Central and Volta regions, all areas where the concentration of prayer camps is high.

According to Nana Oye Lithur, health is very much part of human rights but mental health has largely been ignored.

''There is the need for us as a country to take a critical look at how we care for the mentally ill," she explained, “because a lot of people think mental illness is spiritual and there has to be a prayer for it".

Ms Oye Lithur stressed that the rights of the people who go to prayer camps should be protected. She therefore launched a campaign which sought to reduce the incidence of human rights violations in prayer camps by encouraging referrals of mental health patients from prayer camps to psychiatric hospitals.

Some of the campaign's initiatives are publishing and distributing 1,000 posters to relevant stakeholders in Ghana and launching a Public Awareness Campaign on mental health.

Moreover, CHRI has engaged key stakeholders from the Ashanti Region to form a network of religious leaders, health .professionals and consultants, lawyers, human rights advocates, NGOs and student groups to help in the advocacy.

The network's main objective is the passage of an up-to-date bill to serve as a framework for health and other related matters. According to CHRI, the current law on mental health, the Mental Health Decree, is over 30 years old and has failed to address the challenges facing psychiatric care in the country.

As a result, the Ministry of Health, the Attorney-General's Department and the World Health Organisation have proposed a Mental Health Bill that is cost-effective, regulates prayer camps and provides legal protection for psychiatric patients.

However, "it has been very problematic to push the Mental Health Bill," claimed Dr. Yaw Osei, who chaired the occasion. “The bill is still at the Ministry of Health and hasn't moved to Parliament," he continued.

In 2009, CHRI presented a memo to members of the Appointments Committee of Parliament to get the views of the nominees for the Health and the Employment and Social Welfare Ministries on the passage of the bill.

According to CHRl, the response is encouraging because the Minister of Health, Dr George Sipa-Yankey has pledged his support for the bill.