ECOWAS Parliamentarians to be selected by Universal Suffrage 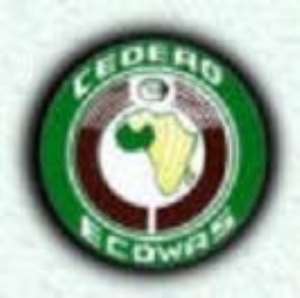 Tamale, May 1, GNA- A new ECOWAS Parliament to be selected by Universal adult suffrage with representation from member states is to be established by the end of 2010.

Other members of the ECOWAS Parliament who addressed the press conference were: Mr. Asante Amoako-Atta, Clerk of the ECOWAS team and Stephen Balado Manu MP for Ahafo-Annor North.

Mr. Tia explained that the present ECOWAS Parliament which is in transition acted only in an advisory capacity without legislative powers and its members were not directly elected.

He said it was only empowered to consider issues concerning human rights and the fundamental freedoms of citizens and also consulting on matters relating to public health policies for the community, common educational policy through harmonization of existing systems.

He said unlike the current parliament where representatives were elected by the National Parliaments to the Community Parliament, this time round each member state would be a constituency and maintain a minimum number of seats allocated to each country.

The electoral bodies of the respective countries Mr. Tia said, would be “responsible for the delineation of national constituencies on the basis of national exigencies and having due regard to 30 percent gender balance in an eligible place”.

Under the reforms, citizens of the community other than parliamentarians of National Parliaments would be eligible to contest to become members of the Community Parliament.

The reforms, he said, were aimed at giving concrete and actual legislative powers to the ECOWAS Parliament and making it relevant and purposeful as well as improving its public image and the quality of democracy within the Sub-region.

Mr. Tia announced that a well-defined structure that would ensure free and fair elections and make the process more open and as well as promote grassroots participation would be announced to the Ghanaian public.