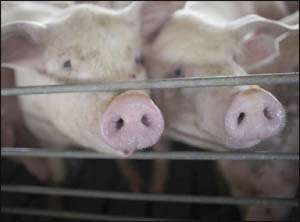 Swine Flu New cases of the deadly swine flu virus have been confirmed as far afield as New Zealand and Israel, as the UN warns it cannot be contained.

The US, Canada, Spain and Britain confirmed cases earlier but no deaths have been reported outside Mexico, where the virus was first reported.

Mexico has raised the number of probable deaths to 152, with 1,614 suspected sufferers under observation.

UN inspectors are to examine reports pig farms may have spread the virus.

The UN's health agency, the World Health Organization (WHO), confirmed that the flu had been transmitted between humans.

WHO chief Dr Keiji Fukuda said it was not inevitable that the outbreak would develop into a global epidemic - or pandemic - but countries should "take the opportunity to prepare".

Several countries have issued warnings against travelling to Mexico, but the WHO and the EU's health chief, Androulla Vassiliou, said such measures would do little to combat the flu's spread.

WHO spokesman Gregory Hartl said experts were working on a vaccine, but said it could take five or six months to develop.

Health experts say the virus comes from the same strain that causes seasonal outbreaks in humans, but also contains genetic material from versions of flu which usually affect pigs and birds.

In New Zealand, Health Minister Tony Ryall said at least three students who had travelled to Mexico had swine flu.

Israeli health officials confirmed on Tuesday that the country now had two people infected with the virus. Both sufferers had recently been to Mexico.

UN alert raised
Sixty-four cases have been confirmed in the US, six in Canada, two in the UK and two in Spain.

The EU said patients were also under observation in Denmark, Sweden, Greece, the Czech Republic, Germany, Italy and Ireland.

Tests are being carried out on individuals or groups in Brazil, Guatemala, Peru, Australia and South Korea.

A number of countries in Asia, Latin America and Europe have begun screening airport passengers for symptoms, while Germany's biggest tour operator has suspended trips to Mexico.

The UN's Food and Agriculture Organisation (FAO) is sending a team to Mexico to investigate rumours that people had been falling ill last month near some intensive pig farms.

The WHO raised its pandemic alert status to level four on Monday - two levels from a full pandemic - after concluding there had been sustained transmission between humans.

Levels five and six are reserved for when there is widespread human infection.

WHO spokesman Mr Hartl said there were a number of cases in New York "which appear to be human-to-human transmission".

He said that if the New York cases were confirmed, the WHO could raise its alert to level five.

The UN body is encouraging countries to begin intensive surveillance of possible infection and send as much information as possible to the WHO.

In Mexico, swine flu has been confirmed in 20 of the 152 known deaths.

In almost all cases outside Mexico, people have been only mildly ill and have made a full recovery.