NDC issues fresh threat... THEY EMPTIED THE TREASURY…Watch, they will face the music… 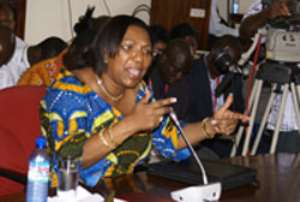 Less than a week after they had been warned by Mr. Victor Gbeho that they had to convince the public that they were not mediocre, one of the deputy Ministers who was among those who received the advise and was sworn in as deputy Minister for Works and Housing, has chosen threats and bombast to prove her mettle

Dr. Hanna Bissiu over the weekend launched blistering attack on the opposition New Patriotic Party (NPP) officials who served in the previous administration, accusing them of emptying the coffers of the state even to a point when the government was about to hand over to the new administration of the ruling National Democratic Congress (NDC) in January. “The results of what the NPP left is that even in January when we took over the reins of government, they were still busily robbing the country,” she alleged.

According to the young, dynamic and inspirational lady, the result of the alleged looting by the said officials was the wobbly economy that the NDC government inherited when it took over. “The rot that we inherited is enormous,” she emphasized.

Dr. Hannah Bissiu made the accusations when she addressed hundreds of students of the Takoradi Polytechnic branch of the Tertiary Education Institutions Network (TEIN) of NDC on the topic -“Hundred days of women empowerment.”

She was, however, quick to warn that no official of the previous government, who was engaged in corrupt acts and other illegal businesses would escape the eagle eye of the NDC government. Any official who would be found guilty of any illegal conduct or corrupt activity would not escape the legal procedures of the country, despite the assurance by the President that he would remain a father for all, and would not witch-hunt anybody, she hinted, adding that “Money stolen, cars stolen, lands and houses wrongfully acquired by any official will be thoroughly investigated and the culprits made to face the music, she stressed.

Instead of keeping quiet after what she described as the mess created to the economy of the country and allow the government to work, she said the NPP officials decided to take over the airwaves with their spin-doctors, in an attempt to throw dust into the eyes of the ordinary Ghanaian into believing that the economy of the country as handed over to the NDC was in good shape. She, however, categorically denied that assertion.

She told the students that the Mills administration was on course and would set its priorities right, instead of engaging the opposition in fruitless war of words. In the same vein, she questioned the basis of the NPP's recent press conference that was used to address pertinent issues of the hundred days of the sitting government.

To her, if Ghanaians should give the NPP 100 days, they would not be able to do what President John Evans Atta Mill did within the last 4 months in government. “They are sabotaging our government, peddling all sorts of lies about the100 days of the government, will they do magic if they had been given the opportunity? She questioned.

Dr. Bissiu, who was among the last batch of deputy Ministers to be vetted by the appointment committee of parliament and were approved last week by Parliament, rather described the 100 days of the government as the best in the history of any government in the country.

Cataloguing the achievements within that period, she said “100 days of tolerance, wisdom at work, strategic planning, best social and economic management programmes have been structured to be rolled out, all within the hundred days”

In the light of the above, she disagreed with the opposition that the administration was slow and advised her own party members, who had hitherto been made into believing that the government was slow, to distance themselves from people who make such comments, since according to her, it was fundamentally meant by their opponents to run the government down.

Dr. Bissiu, whose address intermittently received rapturous applause, also advised the student body and the youth of this country to measure the performance of the government by its programmes and projects and not what the opposition says.

She also advised them to rally behind the government to execute its campaign promises, since according to her that was what matters most to the people of this country.

The eloquent and soft spoken Minister told the enthusiastic students that all the six major priority areas that the government promised in opposition had been fulfilled and that it would continue on that line.

The NDC, she stressed would not, therefore, be deterred by the hue and cry of the opposition. She acknowledged the recognition given to women by the government, with several appointments to them, particularly with key positions that matter in decision making areas of our country, as one of the six promises made by the President which had duly been fulfilled in the 100 days.

Earlier, Hon. Fritz Baffuor, Member of Parliament for Ablekuma South, in an address disagreed with the arguments being made by the opposition NPP members regarding the performance of the government within the 100 days as a failure.

He said that their argument was incongruent with the facts of the matter, because the opposition particularly made noise about the appointment of women into the current government as one of the promises that did not materialize.

He said instead of going by what the party manifesto stated, that 40 % of women were to be appointed into the Mills government, the NPP, he said regrettably decided to push the President to the wall, with the argument that he [president Mills] had stated that 40% of his Ministers were to be women.

He described that argument as 'Voodoo mathematics' being bandied around by the NPP.

Hon. Baffour also shared similar sentiments about how the former government officials allegedly looted the state, and further described those actions as the basis of the weak economy inherited by the NDC “The economy was in such a parlous state, which the officials covered from the press,” he revealed.

To further advance his argument, the MP reminded the students of the things that the NPP officials who served in the previous government said when they were in opposition, including the assertion that they were all self made men. However, he hinted that “The self made men took away everything.” If you are a self made man, why do you take away things that belong to the state? he questioned, adding “Taking away illegally a lot of the resources that the government was to use to work with the transitional team was unacceptable.”

Nonetheless, he believes the NDC has put in place enough galaxy of stars and hardworking Ministers to effectively run the economy of the country. “By July, you will see NDC in action,” he gave the students an assuaging assurance.

Touching on the role of women in nation building, he stated -“ If you care for the people of Ghana, then you have to do something for the women of this country and that is what the President did,” he eulogized President Mills.

To this end, he charged them to fight hard and compete with their male counter parts in every sector of the country's economy. “Everything you do for society, you must do it well without any blemish,” the MP advised.

Alhaji Awudu Arrif, deputy National Organizer of the NDC, was one of the speakers at the function. The programme was chaired by the deputy Western Regional Minister, Hon. Betty Bosomtwe Sam.