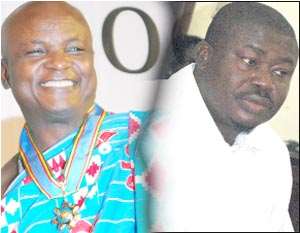 Togbe Afede XIV and Kenwuud Nuworsu Togbe Afede XIV Paramount Chief of Asogli Traditional Council and the President of the Volta Regional House of Chiefs has been accused by Mr. Kenwuud Nuworsu, Volta Regional Chairman of the New Patriotic Party (NPP) of being ignorant about the area he is supposed to be a king of and dared him to come and tour the region with him so that he would be well informed before he makes more comments in the future.

“Togbe is an outsider in his own territory,” Mr. Nuworsu stated, adding that the chief's inability to know much about his traditional area and for that matter, the region, shows that “Togbe is not really interested in the welfare of his people.”

He said, it was the same Togbe Afede who awarded ex-President Kufour with the Model Plan of the Asogli Power Project as a result of how helpful the ex-President has been, “and for the same Togbe to turn round and say Voltarians felt like outsiders in the past eight years is a big sign of ingratitude.”

According to Mr. Nuworsu, who spoke with DAILY GUIDE in an interview at Ho, Togbe depicted more of his ignorance about the region since the durbar ground he made the comment was modified to befit such functions by the ex-government.

Mr. Nuworsu noted further that all the projects the President inspected including Mawuli School Administration block, the Ho-Fume road, the Nurses Training School Complex which are all almost at their completion levels were initiatives of the ex-government.

Developments that were undertaken in the region under the ex-government, according to the NPP boss, are unprecedented. Some of them, he said, include the constructions of Tema-Aflao, Have-Hohoe, Kadjebi-Nkwanta, Ho-Fume, Sogakope-Adidome, Sokode-Akrofu, Sokode-Abutia and many more roads.

Other towns that had their internal roads raised to a befitting standard include Adidome, Dzodze, Ho, Aflao, Hohoe, Nkwanta, Kadjebi and others which are unprecedented in the history of the region.

As part of the ex-government's interest in developing the region, Mr. Nuworsu noted that new assemblies were created and provided with the necessary logistics to help bring first class developments to those areas.

Volta region, he mentioned, benefited from all national policies such as upgrading of some and provision of buses to selected Senior High Schools, the National Health Insurance Scheme (NHIS), which he said the region once recorded the highest patronage, National Youth Employment Programme (NYEP) and wondered what Togbe Afede meant by the people of the region felt like outsiders under the Kufour administration.

“Can anyone then tell me which government policy the Volta region was denied in the past eight years?” he asked.

The NPP Chairman said the Keta Sea Defense Project, the single most expensive and important Project which made life unbearable for the people in that part of the country when it was abandoned by the NDC administration, was taken up and completed by the Kufour administration and all those affected were resettled by the ex-government.

Mr. Nuworsu admitted that though the NPP could not do everything, it had done so much that is unprecedented in the history of the nation, adding that he prays that with the overwhelming support the NDC had in the region, it would solve all problems that the people of the region face.

He entreated all those who seek to preach isolation, ethnicism, and many more divisive messages to desist from them because “it would be wishful for anybody to think that the Volta region can stand on its own.”

He again advised all public figures including Togbe Afede to subject all his speeches to criticisms before finally coming out with it in the public domain “since all negative remarks made, including that of Togbe, would haunt the one who made it for the rest of his life.

Mr. Nuworsu was of the view that Togbe, having being one of the few people who has daily audience with President Mills, could still get all his messages direct to the President and not as he did to subject his throne to all manner of comments from the public.

“When you represent the conscience, philosophy and aspirations of people, you should be circumspect with your utterances because they would live with you and your group from one generation to the other,” he added.

He went ahead and repeated the same statement at a durbar organized in honour of the President by the Chiefs and people of the region at Ho.