This Is Greatness – Otumfuo's 10th Anniversary 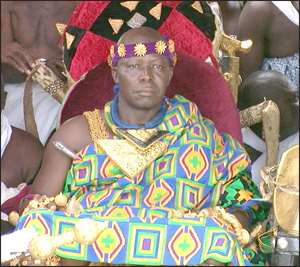 Otumfuo Osei Tutu II The Management and Staff of Guinness Ghana Breweries Limited, Ghana's most celebrated business, have congratulated the chiefs and people of Asanteman, as they observed the climax of the 10th anniversary celebrations of the enstoolement of His Royal Majesty, Otumfuo Osei Tutu II, the Asantehene.

Members of the Executive Management team of GGBL, led by Chairman, Dr. Nick Blazquez, attended several functions over the weekend in the Garden City of Kumasi at the invitation of His Royal Majesty Otumfuo Osei Tutu II.

The atmosphere in Kumasi and indeed throughout Asanteman was one of joy and royal splendour as an entire kingdom and thousands of well-wishers came together to celebrate the greatness of their King – Otumfuo Osei Tutu II.

The atmosphere at the Baba Yara Stadium where the Grand Durbar was held was electric, charged with the passion of a people who had come from different corners of Ghana to pay their respects to Otumfuo's greatness.  Guinness recognizes the innovative, dynamic and bold nature of Otumfuo's reign.  Guinness finds an abundance of greatness in the inspirational leadership that has been exhibited by Otumfuo Osei Tutu II since his ascension to the throne 10 years ago.

The rich culture of Asanteman was on full display in a kaleidoscope of colours as the traditional kente cloth of the finest quality was outdoored by thousands of proud men and women.  There was gold in abundance beyond imagination to show the rich heritage of the land.  His Royal Majesty, Otumfuo Osei Tutu II was adorned as expected in his full regal attire, bedecked with the finest jewels Asanteman could afford their illustrious son.  The kente cloth he wore could be the handiwork of divine weavers, as the colours and texture hypnotized admirers into an enchanting land only befitting a great king.

Through the Guinness brand, the airwaves of Asanteman were full of appellations and praises for Otumfuo and this enhanced the joyous mood in Asanteman to a climax in time for the Grand Durbar.

As would be expected at any royal occasion, there was plenty to eat and drink and the good times seemed like they would never cease.  The entire portfolio of GGBL brands were available for the pleasure of thousands who attended the various functions. The commemoration of the tenth anniversary celebrations shall be remembered for many years to come as the Kingdom of Asanteman continues to be led by such a great, bold and dynamic leader as His Royal Majesty, Otumfuo Osei Tutu II.

Women Are Placed First In NDC — Naana Jane
1 hour ago