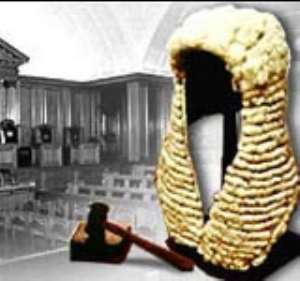 The four, appeared before an Accra High Court to answer contempt charges against them. Details of the intervention by the Deputy Minister Mr. Ebow Barton Oduro were not known as the case was heard in the judge's chamber when it was called.

Mr. Ashitey, Fats Nartey, Chief Director of RCC, J.A. Tufour and Chief Okai, Director of Administration and Chief Security of the AMA were cited for contempt on Monday after they allegedly caused work on the construction of commercial stores and offices at the Tudu lorry park in Accra to be stopped contrary to the court's order.

The court had on April 8, directed Continental Sikaman Agencies Limited to continue construction work on the project but on the orders of Mr. Ashitey, an AMA task force caused work to be stopped at the project site on April 10.

The AMA leased the land to the company in 2007 for 25 years, after the company won a competitive bid to construct market stores and offices for rent.
However, the market women, mainly tomato sellers occupying the land, have refused to leave the place to allow work to go on.

The women, initiated legal action against the company and AMA at the High Court in October, 2007.

The court granted an application for an interlocutory injunction to restrain the company from relocating the traders; but on July 25, 2008 it set aside the injection and ordered' the company to give an undertaking to complete the project within 12 months and give the women the first option to rent them.

When the case was initially called on Thursday at about 9.30 am, however, all the respondents were present with the' exception of the Regional Minister.

Counsel for the minister, Ms. Hanna Pearl Siriboe, informed the court presided over Minister was in a meeting but the judge insisted that he appeared personally.

"He must be here! The dignity and regard that must be accorded the court should be sacred," he stressed.

He noted that the matter was a contempt case, hence the parties must appear in persons because there were consequences for not appearing to answer the charge. He, therefore, stood the case down to 2.00pm to enable the minister to appear.

When the case was resumed in the afternoon, the minister showed up with the Deputy Attorney-General, Mr. Barton-Oduro, and after the counsel for respondents had introduced themselves, Justice Ofosu-Quartey remarked, "The court is' a sanctuary which has it dignity and not a place for beating war drums to resolve issues".

The judge then called the parties to his chambers and after about 20 minutes, returned to announce that the construction firm should hold on with work on the project until May 7, to allow the dispute over the land at the Tudu park to be resolved.

Justice Ofosu-Quartey commended the Deputy Attorney-General for his intervention.