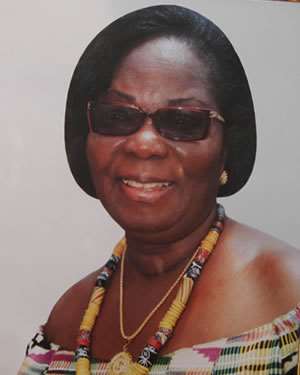 
Brigadier General (Rtd.) Dr. Daniel Ampadu Twum, former Commanding Officer of the 37 Military Hospital (husband), Kristyne Yaa Korang Ofori (nee Twum, daughter) and families of the late Mrs Gertrude Dede Twum have expressed their sincere gratitude to all who have mourned with them since her death.

Mrs Gertrude Dede Twum died on March 12, 2009 at the age of 67 after a short illness. She was buried on Saturday at the Osu Cemetery after burial service at the St. George's Garrison Anglican Church, Burma Camp, Accra.

Until her death, Mrs Gertrude Dede Twum was President of the Volta Hall Alumni Association of the University of Ghana and a Board Member of the Unicorn Ink Group. She was previously the Human Resource Director of the Ghana Cocoa Board until she retired in 2001, and also broadcaster with the Ghana Broadcasting Corporation.