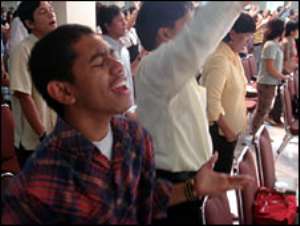 
Mr Eric Opoku, Deputy Brong-Ahafo Regional Minister, at the weekend appealed to religious bodies to partner the new government to facilitate the pace of national development.

He noted that even though religious institutions did not engage in active partisan politics, there was the need for them to ensure that they contributed meaningfully in the areas of health and education as well as help to alleviate poverty.

Mr Opoku made the appeal at the 43rd Brong-Ahafo Regional Presbytery Meeting in Sunyani.

The seven-day meeting, which all the 29 parishes in the region are attending, is under the theme; “Put on the Armour of God.” It also saw the ordination of six ministers of the church.

Mr Opoku said there was the need to revisit the Presbyterian doctrine to promote discipline among the youth.

The Deputy Regional Minister noted that the number of children on the streets was a contributory factor to the upsurge of acts of immorality among the youth in the region.

He advised the newly ordained ministers to see their call as a challenge and serve the people with dedication, humility and selflessness.

Reverend Robert Richard Brobbey, Regional Presbytery Chairperson said Christians should understand that they were engaged in a spiritual warfare against Satan and evil cosmic forces.

He underscored the importance for Ghanaians to accept God's omnipotence to enable them to survive as a nation.

Rev. Brobbey called on religious and traditional leaders as well as politicians to realize the wisdom in seeking God's counsel, guidance and protection in all spheres of life.

“As a nation we had to overcome the obstacles to our unity and development so that we can stay focused,” he said.

Rev. Brobbey expressed concern about the rate of unemployment among the youth and urged the government to initiate job-creating ventures to provide employment for the citizens.

He said filth was still a problem and called on the government to initiate a process where polythene and other plastic waste could be recycled.