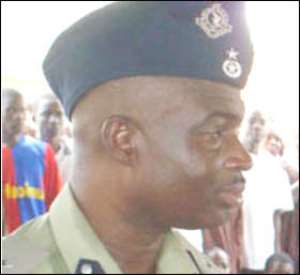 The Interior Minister, Cletus Avoka, who confirmed the withdrawal on an Accra-based radio station, said it was meant to avoid any further confrontation between the two and to create room for investigations into the matter.

DCOP Gyeabuor confirmed to DAILY GUIDE via phone, his removal as police chief of the region as contained in a correspondence to him from the Acting IGP, Mrs. Elizabeth Mills-Robertson.

He disclosed that he would be in the region on Tuesday April 21 to hand over to his deputy, ACP Patrick Adusei Sarpong until a substantive regional police chief is named.

Even though he would be at the Police Headquarters in Accra until the outcome of the matter, no special duty has yet been assigned to him as at press time yesterday.

The stalemate in the relationship between the Regional Police Commander and the Minister led to the former being walked out of a Regional Security Council meeting on Tuesday April 14 for allegedly leaking intelligence information to the media.

The Minister, who doubles as Chairman of REGSEC, said other members of the Northern Regional Security Council (REGSEC) do not want DCOP Ofosu Mensah-Gyeabour on the council anymore, questioning his competence and saying he cannot be trusted with delicate security information and thus, does not deserve to be on the Council.

DCOP Mensah-Gyeabour, DAILY GUIDE gathered, started incurring the wrath of the Minister soon after his assumption of office, leading to the bad blood between them.

It however took a different dimension last month when the police chief allegedly informed the media about the decision by the REGSEC to extend a one-month moratorium given to all residents of Tamale to surrender their weapons.

Sources said the REGSEC was scheduled to address a press conference to make the announcement about the developments but the Regional Police Commander allegedly leaked the information to the press a day before the press conference was to take place.

DCOP Gyeabour rejected the claims, saying, he only spoke about the REGSEC's decision to extend an ultimatum for voluntary surrender of weapons and an amount of GH¢300 for each weapon turned in, wondering why the minister could subject him to such ridicule.

He therefore filed a petition to the acting Inspector General of Police and the Interior Minister.

The police officer said even before the so-called leaking of information, the Minister, on assumption of office, had said he had no confidence in the police on several platforms.

As a result, DAILY GUIDE gathered that the minister sent a 9-page petition to the Police Council questioning the neutrality of DCOP Gyeabuor.

Meanwhile, the Minister has come under fierce criticisms by sections of the public in the region for his conduct which many have described as unprofessional.

Callers into local radio station programmes in Tamale have taken a swipe at the Minister's decision and expressed worry that it could degenerate into something else, if not properly handled by the Police Council and the Ministry of the Interior.

Give Me Chance To Correct My Errors — Disqualified Kofi Kora...
48 minutes ago