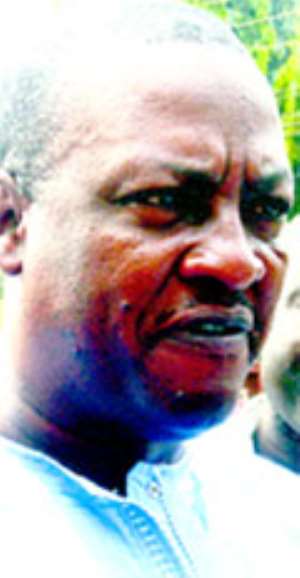 The usually calm and gentle Vice President, John Dramani Mahama, is boiling with rage over reports that he travels with many cars convoy during his travels.

He advised the media to be circumspect with the information they put out in the public domain since it has the tendency of creating negative impressions in the minds of the public.

He takes particular exception to a report carried in the April 14, 2009 edition of the 'The Statesman' newspaper under the headline -'NDC's weekend of car shows' which sought to put him in bad light.

In a statement issued from the office of the Vice President and signed by his Media Co-Coordinator, Mr. Mawuko Zormelo, Mr. Mahama expressed deep shock and surprise at the content of the said story, describing it as scurrilous and full of untruths.

Whilst admitting that on Saturday, 11th April, 2009, he indeed attended a Charity event organized by the Joyce Tamakloe Memorial Foundation on Cancer, to raise awareness and funds for the Urology Department of the Korle-Bu Teaching Hospital, the Vice President placed on record that he attended the said event in a convoy of two vehicles and not in a long convoy as 'The Statesman' sought to portray in the eyes of the public.

According to him, most of the supposed fanciful cars belonged to the invitees and would-be donors, most of whom were expatriates.

“If the Statesman reporter was attentive at the event, he would have learnt that the Charity event had been organized in collaboration with the Mahama family and that H.E. the Vice-President was present to lend his support to this noble and worthy cause. Indeed, the Mahama family has been organizing this cancer fund-raising event for the past three years”, he emphasized.

On Sunday, April 12, 2009, the statement noted that the Vice-President traveled from Accra to Wa (by air), and from Wa to Bole (by road) to attend this year's Congress of the Gonjaland Youth Association.

In this instance, the statement said his convoy was made up of three four-wheel-drive Land Cruiser vehicles, stressing that “although party executives and friends from the Gonjaland Youth Association were in Wa to accompany him to Bole in their Party and private vehicles, the Vice-President insisted that these vehicles preceded him to Bole and his wishes were obeyed.”

Concerning what it termed as 'the dreamed up travel' of the Vice President to the Eastern Region, his office noted that it has become abundantly clear that the trip did not occur.

The Vice-President thus assured all Ghanaians that the leadership of the NDC is very much conscious of the party's campaign promise to lead an austere government and have since their assumption of office, lived by that promise. In this regard, he noted that neither he (the Vice President) nor the President drive in long convoys.

He has, therefore, cautioned media houses to always cross-check their facts before putting certain things in public domain to avoid such scurrilous reports about public officials and to endeavour to uphold the integrity of the noble profession of journalism.