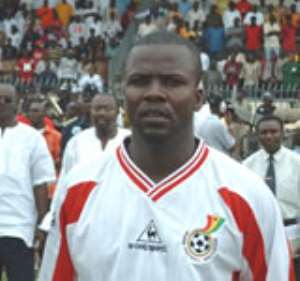 
Former Bayern Munich and AS Roma tough tackling defender, Samuel Osei Kuffour is on course to realize his long-cherished dream of lacing his boots for Kumasi Asante Kotoko before finally calling time on his illustrious career.

The former national star, whose distinguished career has made him a global football icon, is set to feature for the Porcupine Warriors during the second part of the Glo Premier League season in a dual role as player and management member, according to sources close to the club.

With the current Sylvester Asare Owusu led-management seemingly on their way out of office after a disastrous season for the Fabulous boys, Kuffour has been earmarked for a place in a newly-formed management team that would include former national stars, Opoku Nti and former goal poacher extraordinaire, Tony Yeboah of Yegoala Nightclub fame.

In 2003, Kuffour revealed to the BBC in an interview for the 'Heart and Soul' documentary that he wanted to be a priest or a missionary when he retired from football, so it is not known whether he still harbours that ambition or he's going to concentrate fully on helping Kotoko recapture their last season's form.

Meanwhile, 90 Minutes understands that Kotoko's team manager, Opoku Afriyie, who also doubles as the Black Stars welfare officer, is to assume temporal duties as CEO of the club for a period of one month to prepare the way for the incoming management who might also have on board past Kotoko management members, Jarvis Peprah and Yaw Gyasi.

It has been speculating all round in Kumasi after the Easter holidays with many supporters wondering who might constitute the incoming management team and which players they have earmarked for possible inclusion into the team.

In a related development, word going round in Kumasi indicates that Sammy Kuffour has promised to bring Hearts of Oak wonderkid, Tawrick Jibril to Kotoko.

Kuffour has close ties with Jibril and sources say he might impress on the youngster to make a controversial switch to Oseikrom.