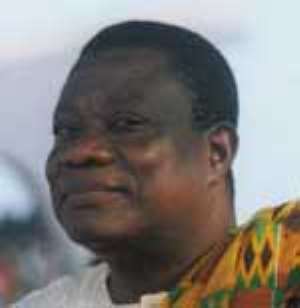 An April 15, 2009 news report published on the website of leading privately-owned media organization, Joy-Fm, had the communications director of President John Evans Atta-Mills claiming that it was the immutable policy of the ruling National Democratic Congress (NDC) to systematically, effectively and permanently marginalize media organizations which the government considered to be hostile and/or unsympathetic to the agenda of the NDC.

If so, then the preceding simply means that while the Rawlings-chaperoned political juggernaut has conveniently assumed a democratic façade – from the pseudo-civilian dictatorship of the so-called Provisional National Defense Council (PNDC) to the brazenly chameleonic guise of a National Democratic Congress – in essence, the P/NDC is a permanently frozen, pathologically vindictive and incorrigibly reprobate ideological machinery that is likely to supervise the precipitous decline of Ghana's otherwise salutary, albeit fledgling, democratic cultural dispensation.

More significantly, it also means that the president's inaugural promise to become the “Father of All Ghanaian” was just plain hogwash, as it were.

Of course, without even any intention of punning on the purely literal and personal, no serious student of P/NDC political culture could be aptly said to have envisaged President Atta-Mills being able to effectively execute his publicly stated intention of running an all-inclusive government. What is rather disturbing, however, is the apparent carte blanche which the president seems to have ceded his communications director, to the damnable extent of virtually sidelining the cardinal portfolio of Ghana's Minister of Information, Ms. Zita Okaikoi, whose initial cabinet nomination, to begin with, was met with a lot of misgivings from among the ranks of leading NDC operatives.

And on the foregoing score must also be added the fact that Mr. Koku Anyidoho, the president's communications director, appears to have elected to forge an inexorable collision course against any top functionary, or cabinet appointee, whose portfolio is perceived to threaten the presumably peremptory authority of the Atta-Mills communications director.

Recently, for example, Mr. Anyidoho was widely reported by the mainstream media to be engaged in what was then characterized as a mortal combat with Mr. Mahama Ayariga, the former Bawku-Central Member of Parliament who had just been named Presidential Spokesman. The two men were also reported to be at cross-purposes, with Mr. Anyidoho, allegedly, presuming himself to be the de facto boss of Mr. Ayariga.

No doubt, what the preceding highlights is the need for the president, or whoever the latter has so delegated, to promptly draw up the functional demarcation lines for the three players involved with the government's information dissemination apparatus, if, indeed, this vital aspect of the Atta-Mills administration is not to effectively, and fatally, hobble the president's agenda.

And here must also be highlighted the fact that Mr. Anyidoho originally was appointed to his current capacity during the Atta-Mills presidential campaign, thus rendering the former more of an NDC party machine operative than a presidential propaganda guru. In other words, the proper position for Mr. Anyidoho may likely be at the NDC party headquarters, rather than acting as the main propaganda operative at either The Castle or Flagstaff House. And, while, indeed, the presidency may require the services of a communications director, the best qualified person for that post clearly does not appear to be Mr. Anyidoho who, throughout the Atta-Mills presidential campaign, did not creditably acquit himself even at the level of a minor communications expert. And as this writer once had the occasion to point out, Mr. Anyidoho could not even accurately spell the surname of the sitting American president.

What is also quite intriguing is the fact that Ms. Okaikoi, the Minister of Information, would so promptly and poignantly call in to Peace-Fm, the radio station on whose airwaves the president's communications director had had the temerity to announce, during a panel discussion, that it was the religiously stated policy of the Atta-Mills administration to totally shut out adversarial journalists, in order to vehemently protest the same.

There definitely appears to be a very serious problem regarding the latter; for, ordinarily, it is the Minister of Information, and not the party's communications director, who runs official policy, unless the president, by his action or inaction, intends to send out an unmistakable signal that as far as he is concerned the cardinal cabinet portfolio of an Information Minister is effectively and incontrovertibly that of a ministerial adjunct to that of the communications director, whose function primarily appears to be akin to that of a presidential press secretary. And if the latter observation is accurate, then Mr. Anyidoho clearly appears to have acted ultra vires, or outside his jurisdiction and must be promptly called to order.

The good news for those media houses which, according to Mr. Anyidoho, have been effectively and permanently “blacklisted and would not be invited by the presidency to any function,” is that now they have been, literally, given the green light to recklessly cudgel, if they so wish, or publish anything that they may deem to be erosive of the people's confidence in their government, having also been given the legitimate excuse of a publicly stated gubernatorial enmity. In other words, in any democratic culture worth its while, just because the government decides to make voluntary and unilateral enemies of intelligent and critically thinking journalists, as opposed to sycophants, does not, in any way, proscribe the right of professional access to functions organized by persons employed by the Ghanaian taxpayer to officially conduct the people's business. Unless, of course, the Atta-Mills government can state with verifiable confidence that Ghana's Fourth-Republican Constitution also reserves the legal right to coercing illegally disenfranchised journalists and the segment of the national population which they represent to suicidally and slavishly pay for their own effective exclusion from the conduct of crucial national affairs.

In sum, either the likes of Mr. Anyidoho have their minds still stuck in the unforgivably benighted “revolutionary years” of the so-called Provisional National Defense Council (PNDC), or they have, somehow, been wired by Destiny to precipitate their own self-destruction in the offing. For, it goes without saying that in unwisely colluding to unconstitutionally exclude critically thinking and independent-minded Ghanaian journalists from the conduct of national affairs, the Atta-Mills government has effectively guaranteed that it would advance past Election 2012. Those Doubting Thomases and Thomasinas had better mark this observation in their diaries and calendars.

*Kwame Okoampa-Ahoofe, Jr., Ph.D., is Associate Professor of English, Journalism and Creative Writing at Nassau Community College of the State University of New York, Garden City. He is the author of 20 books, including “Sounds of Sirens: Essays in African Politics and Culture” (iUniverse.com, 2004). E-mail: [email protected].