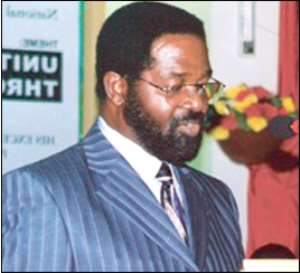 Since news about the allegedcorruption baggage the nominee attracted in the United States' state of Carolina was splashed by the local media, he has sought to debunk the allegation but AFAG has described the efforts as spurious.

AFAG, in a press statement on the issue signed by Abeeku Dickson and Sammy Awuku, claims that the nominee is only throwing dust into the eyes of Ghanaians by stating the indictment record against him has been expunged on the orders of a court in that country.

According to AFAG, he is “being economical with the truth on the state of his indictment by the South Carolina State Board of Education. This is farther from the truth.”

The facts, according to AFAG, are that Dr. Vanderpuije was arrested and sent to the police station on a complaint by the state board of education on the basis of an audit report which found that he had misused funds of a certain middle school which he headed in Richland County.

This, AFAG went on, was a breach of the district's procedures, adding that he was bailed and the case was listed on the Court of General Sessions in the county.

The nominee, AFAG explained, was served with a notice of a right of hearing before the state board. This implied that he was entitled to a pre-trial intervention programme or arbitration.

At the board, AFAG posits that Dr. Vanderpuije voluntarily waived his right to a hearing, an obvious admission of guilt, and accepted the sentence of a suspension of his certificate for a period of one year, June 13, 2005 to June 12, 2006 and also resigned from his job.

AFAG states that the board of education can only revoke or suspend the certificate of any person as a result of unprofessional conduct, dishonesty and evident unfitness for the position for which a person is employed.

The Court of General Sessions which was to process the nominee on June 6, 2006 did not do so because he had successfully completed the pre-trial intervention programme and on that basis the court expunged the offence and records of the arrest and the charge in the court.

This, AFAG maintains, did not however expunge the findings, conclusions and sentencing by the Board of Education.

“Dr Vanderpuije should therefore not hide behind the Court of General Sessions to throw dust into the public's eye,” adding that “honesty is crucial here”.

Calling on the President to make his commitment to accountability and the fight against corruption count, AFAG states that “Dr. Alfred Vanderpuije's nomination cannot stand.”

AFAG has expressed disappointment in the President's response to corruption and accountability and promises to seek the intervention of the Commission on Human Rights and Administrative Justice to enhance the crusade against the aforementioned social vices.

The position became vacant following the exit of Mr. Stanley Blankson on the diktat of President John Evans Atta Mills to all Municipal/District Chief Executives.

With the nomination for the position of Accra Mayor now on fire like those of DCEs, the President has attracted another item to his plate of woes.

He has two options, which are to either listen to the concerns raised by AFAG and others or ignore them and damn the consequences. Just how he manages this challenge will be a major litmus paper for his good governance record as he hits his 100th day as the First Gentleman of the Republic.