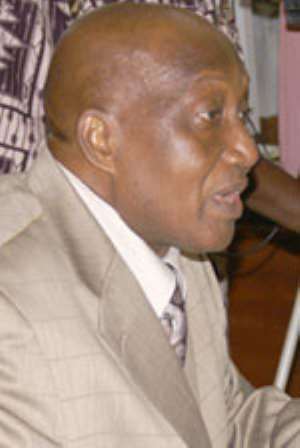 THE ASHANTI Regional Minister, Mr. Kofi Poku Manu, has halted and attempt by the management of the Kumasi Metropolitan Authority (KMA) to extort monies from various business entities in the Kumasi metropolis.

The Minister has disclosed that in a bid to improve upon revenue mobilisation, the management of the KMA held a series of meetings, between July and December 2008, to prepare draft rates on Business Operating Permits for consideration and approval by the Assembly.

Mr. Poku Manu, who has oversight responsibility over the KMA, said some of the drafts leaked out as demand notices, which he described as unfortunate, saying the purported draft demand notices were null and void.

According to him, the issue involving Business Operating Permits and other related pending matters, would be placed before the Assembly for consideration and approval at the next Assembly meeting.

The said demand notice was issued on the strength of the powers vested in the KMA, under sections 34, 77, 78, 94 and 98 of the Local Government Act 1993 Act 462, and other relevant bye-laws, to levy and collect Business Operating fees.

The demand notice cautioned that “the KMA reserves the power to prevent you (businesses) from conducting any business activity in the Kumasi metropolis in the event of your failure to comply with the demands of this notice.”

But, Mr. Poku Manu says this is an anomaly. “I stand for transparency, and therefore I am against any shoddy deals,” he said at a hurriedly organised press conference on Tuesday, in an effort to right the anomaly.

Meanwhile, the Regional Minister has explained the seemingly slow pace and low key at which the KMA had been operating of late.

According to him, without a Metropolitan Chief Executive (MCE), the Assembly was not properly constituted to hold its full session to elect a Presiding Member.

He said with the nomination of Mr. Samuel Sarpong last Monday, he hoped that the proper procedures would be followed to approve the MCE, to enable the KMA work at full capacity.

In a related development, two employees of the KMA, and a storekeeper at the Ministry of Agriculture, have been interdicted for their involvement in the illegal disposal of bags of fertilizer estimated at GH¢200,000.

The affected KMA officials are Richard Blewu, Administrator, and one Kyeremateng, of the Planning Department.

Mr. M. K. Addae, Metro Co-ordinating Director of the KMA, has denied knowledge of the transaction, even though he has given a statement to the police to corroborate the deal involving the said employees of the Assembly.