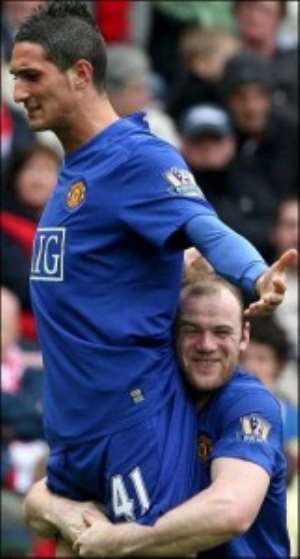 Seventeen-year-old Manchester United sensation Federico Macheda scored his second winning goal in a week after coming on as a substitute at Sunderland as Manchester United regained top spot with a 1-2 win at the Stadium Of Light.

On a day when English football marked the 20th anniversary of the Hillsborough Disaster, Liverpool had swept Blackburn Rovers aside in the early kick-off to briefly overtake United at the top of the Premier League.

In an emotionally charged atmosphere at Anfield, Fernando Torres put the home side ahead after five minutes and doubled their lead with a headed second in the 33rd minute.

Goals in the second half from Daniel Agger and David Ngog cemented their win and ensured the absence of the rested Steven Gerrard did not impinge on Liverpool's title bid.

Attention then switched to the The Stadium Of Light where Paul Scholes headed home a Wayne Rooney cross to give the champions an early lead.

The England striker went close to a second with a strongly-struck shot after the break but Kenwyne Jones capatalised on an error from Ben Foster to score for Sunderland from close range.

Macheda, on as a substitute for Dimitar Berbatov, continued his meteoric rise by scoring with his first touch to turn in Michael Carrick's shot as United re-assumed top spot.

An astonishing game at Stamford Bridge saw Chelsea surge to a four-goal lead before Bolton pegged them back to 4-3.

Michael Ballack's first Premier League goal of the season after a neat one-two with Salomon Kalou had got Chelsea on their way and Didier Drogba added a second with a left-footed finish to convert Frank Lampard's free-kick.

Lampard's seventeenth goal of the season from the penalty spot and a second from Drogba seemed to have sealed a handsome win.

But Bolton hit three goals in less than ten minutes as strikes from Andy O'Brien, Chris Basham and Matt Taylor set up the prospect of one of the most remarkable comebacks in Premier League history.

In a barnstorming finale Bolton saw a last-minute effort cleared off the goal-line as Chelsea clung on for the win.

Arsenal came out top against Wigan with Mikael Silvestre an unlikely scorer at the JJB Stadium as the Gunners won 1-4.

Arsenal dominated opening proceedings but Mido was first to convert a chance as the on-loan Egyptian striker gave Steve Bruce's Wigan the lead with a close-range volley.

Johann Djourou went off injured for the Gunners, Ben Watson struck the Arsenal upright on the stroke of half-time with a free-kick and Gunners youngster Kieran Gibbs cleared a Mido effort off the line.

Theo Walcott equalised in the second half with his first goal since October before Silvestre struck from six yards to win the points after good work from Cesc Fabregas. Andrei Arshavinand Alex Song added gloss to the win with two injury-time goals.

Middlesbrough earned a crucial three points in their battle for survival with a 3-1 win at The Riverside against Hull.

Boro started brightly and a fourth minute Tuncay finish gave them the lead but the home side soon reverted to type when a Nick Barmby cross was headed in by Manucho for the Tigers at The Riverside.

Matthew Bates then poked in his first Premier League goal past Matt Duke in the Hull goal to boost Boro hopes of a fifth home victory and Marlon King's goal against his former club sealed the points.

Portsmouth and West Brom shared honours in a see-saw 2-2 draw at Fratton Park.

Niko Kranjcar punctured this with a free-kick of his own to level matters to leave the Baggies marooned at the bottom.

Alan Shearer earned his first point as a Premier League manager but a draw at Stoke means his Newcastle side remain in the relegation zone.

Ex-Magpie Abdoulaye Faye stole an early lead for Stoke with a close-range header and it looked as if Newcastle would become the latest victims of Stoke's impressive home record with the visitors showing little in the way of attacking intent.

Andrew Carroll salvaged a point though with a fine headed goal after Damien Duff crossed for him but the performance and the result will do little to ease fears over Newcastle's Premier League safety.

In the London derby between West Ham and Spurs Roman Pavlyuchenko's fourteenth goal of the season gave Harry Redknapp's side local bragging rights.

The substitute struck after nice work from Luka Modric as Spurs continued their push for a European slot.