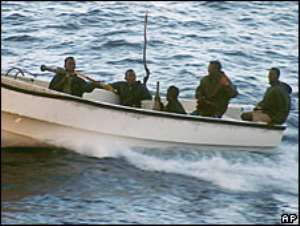 
Somali pirates have hijacked a US-owned tugboat in the Gulf of Aden with 16 crew on board, reports say.

Maritime industry sources say the tug, which sails under an Italian flag, was towing two barges at the time of the attack, at 1100 local time (0800 GMT).

The crew are said to be unharmed. The US and Italian governments have not confirmed the hijacking.

Meanwhile pirates holding a US captain hostage have warned that using force to rescue him could result in "disaster".

The pirates said they hoped to transfer Capt Richard Phillips from a lifeboat to a bigger vessel, as US and other naval ships made their way to the area.

He is being held by four pirates hundreds of kilometres off Somalia.

In other developments:
Sailors on a Panama-flagged bulk carrier repulsed a pirate attack with water hoses. Nato officials on a nearby Portuguese warship said an unexploded rocket-propelled grenade landed in the commanding officer's cabin
On Friday, one Frenchman and two pirates were killed in a rescue operation by French troops on another vessel captured off Somalia. Four others, including a child, were freed from the yacht

Growing concern
Earlier reports suggested that a group of Somali elders were preparing to mediate between American officials and the pirates for Capt Phillips' release, but there has been no news of any progress.

The US national was taken hostage on Wednesday after pirates hijacked his ship, the Maersk Alabama, as it sailed towards the Kenyan port of Mombasa carrying food aid.

Earlier reports suggested that a group of Somali elders were preparing to mediate between American officials and the pirates for Capt Phillips' release, but there has been no news of any progress.

The US national was taken hostage on Wednesday after pirates hijacked his ship, the Maersk Alabama, as it sailed towards the Kenyan port of Mombasa carrying food aid.

After a long struggle, crew members regained control of the ship. It is thought Capt Phillips offered himself as a hostage in order to save his crew.

The Maersk Alabama is expected to arrive in Mombasa in a matter of hours.

There has been rising concern in the US over the fate of Capt Phillips - Defence Secretary Robert Gates told reporters in Washington on Friday that the safe return of the captain was a "top priority".

FBI experts are helping negotiate his release, but analysts have said the process could be lengthy.

Capt Phillips tried to escape on Friday by jumping overboard and swimming towards a nearby US ship, but was recaptured.

Reports in the US say the pirates are demanding a ransom of $2m for his safe release.

The US Navy destroyer, USS Bainbridge, is at the scene of the confrontation with other American warships on the way.

Stories circulating in Somalia claim that extra pirate ships are also making their way towards the area.

The pirates say they hope to transfer Capt Phillips to a bigger and better-protected vessel.

The Pentagon is also said to be considering other options, including possible military force, US sources say.

But the Somali pirate commander warned against any forcible intervention.

"I'm afraid this matter is likely to create disaster because it is taking too long and we are getting information that the Americans are planning rescue tricks like the French commandos did," Abdi Garad said.

Somalia has been without an effective government since 1991, fuelling the lawlessness which has allowed the pirates to thrive.

Pirates typically hold the ships and crews until large ransoms are paid by the shipping companies. Last year the firms handed over about $80m (£54m).

Efforts to stop the pirates have so far had only limited success, with international naval patrols struggling to cover the vast areas of ocean where pirates operate.