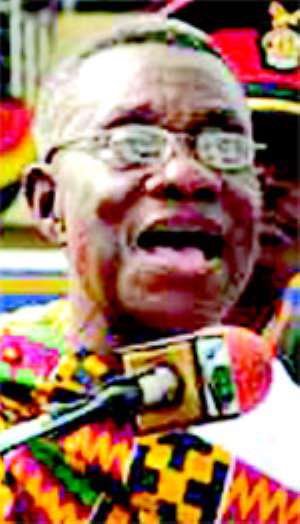 The long awaited list of nominees for District Chief Executives in the country by Professor John Atta Mills has ignited nationwide anger and disappointment among the membership of the National Democratic Congress (NDC).

At Akwatia in the Eastern region, reports reaching The Chronicle indicate that the youth in the constituency have actually torched the party office, destroying computers and other items in the office. By the time the party's parliamentary candidate, Alhaji Baba Jamal was reached, he could not do anything about it as the youth were in no mood to countenance any remonstrations of peace.

The relatively long time it took for the names of the nominees to be considered had the effect of raising tensions to breaking point. Various interest groups within the party sprang up, with each NDC group canvassing for the nominee of their choice, but with each group taking entrenched positions behind their preferred candidate.

In Jomoro, the announcement of the name of one Stephen Blay, has raised hackles with the NDC constituency chairman, Mr John Mensah, calling on President Atta Mills to withdraw the nominee immediately, or else face the wrath of the youth in the area, led by Mr. Amihere.

Incredibly, they alleged that Mr. Blay is a member of the New Patriotic Party (NPP) and physically campaigned for Nana Akufo Addo during the run off.

Mr. Mensah suspected foul play and called on President Mills to reconsider his appointment, saying that they will advise themselves if the party did not listen to them.

It was a similar story at Swedru where the shock announcement of the Democratic People's Party (DPP) candidate for the 2008 elections was named as the nominee, over the pick of party die-hards in the constituency.

The District Chief Executive, a Pupil teacher, Ms. Susana Keelson-Aikins was picked over members who had been through vetting and distinguished themselves like Ibrahim Suberu, a Financial Consultant with an MBA from Lincoln in the United Kingdom, was overlooked.

The Agona West constituency was almost in turmoil following the announcement, and reports from Agona Swedru has it that, they will embark on demonstrations this weekend. Mr. Ibrahim was the parliamentary candidate for the NDC, and pulled over 12,000 votes while the DPP candidate who has been named as the DCE managed 100 votes. Mr. Obodai, the NPP candidate won with 18, 000 votes.

It is a similar story in Kwaebibirim, also in the Eastern region where the announcement of the name of Mr. Geroge Agyeman Duah has sparked mass discontent among the NDC who have threatened President Mills with demonstrations.

In Sekondi Takoradi, the name of the Municipal Chief Executive, the party's parliamentary candidate for Takoradi, a Mills loyalist, has been met with disappointment, and it is unlikely to go down well with the party in Takoradi.

Here in Accra, there are also protests over the selection of Alfred Vanderpuije as the new MCE.

Meanwhile the deputy Minister of Local Government and Rural Development, Mr. Elvis Afriyie- Ankrah has appealed to supporters of the party to exercise restraint since the President had no bad intention against any of the assemblies and the choices made. He said three names were sent to the President from each district for his final consideration and selection.