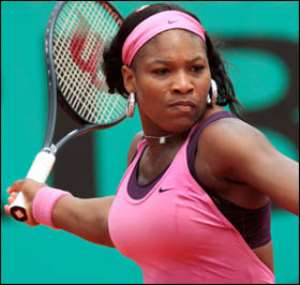 Serena Williams Victoria Azarenka claimed the biggest victory of her career, claiming the Sony Ericsson Open title with a 6-3 6-1 win over an injured Serena Williams.

The American's left leg was heavily strapped, but she kept pace with her opponent as the pair traded early breaks. However, Azarenka ran off four games in a row to claim the first set 6-3 before strolling through the second with Williams clearly hampered.

The Belarussian showed commendably few nerves, settling early into the biggest match of her life, and broke the serve of Williams in the third game as her forehand tested the top seed.

Williams broke back though, and moved ahead courtesy of a crosscourt forehand, which thrilled the Miami crowd. At 3-3 though, the match started to turn decisively Azarenka's way.

Williams saved two break points to take the game to deuce before finally succumbing, and that was the beginning of the end as the 11th seed exploited her opponent's reduced mobility.

World number one Williams found the net to hand Azarenka another break and with it the set, before briefly rallying to hold her first service game of the second.

But that was as good as it got for Williams who battled stoically but could not claim another game, attempting to hit her way out of trouble.