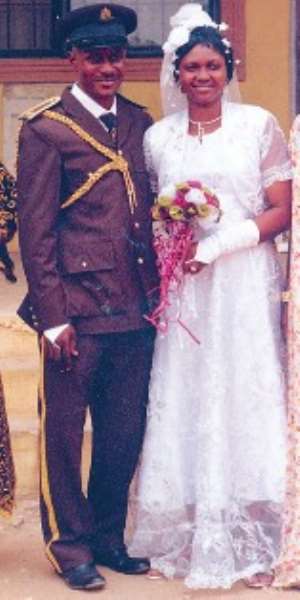 It is two weeks since the Oti family lost one of their members, but they are far from recovering from the shock of his tragic death. The family was the envy of many in the morning of March 21, as friends and well wishers gathered to rejoice with them on the wedding of their son, 35-year-old Gbenga Oti, to his longtime girlfriend, Ololade.

In less than 10 hours after the ceremony, however, the family found themselves mourning the death of their beloved son whose wedding they had just celebrated. They were saddled with the unfortunate task of informing guests and well wishers, some of whom were still hanging around the family house in Isheri, Lagos that the newlywed had been shot dead by a security guard at the hotel he had chosen for his honeymoon.

The development left Lolade with the unenviable record of the woman with one of the shortest marital life. She got married at about 10:30am, and by 8: 30pm the same day, she had become a widow, no thanks to the dane gun of the security guard named Nurudeen.

Rather than leave her father and mother and cling to her husband as instructed by the scriptures, Lolade is now back in her parents' house, wondering if the wedding she had was a dream. Numerous calls made by our correspondent to her telephone went unanswered. And when it was eventually picked, the person who refused to confirm or deny that it was Lolade said, “What else can you do? Can you bring him back? We don't want this publicity.”

However, while the bereaved wife may have resigned herself to fate, her late husband's family has not. Sekola, Gbenga's younger brother, said, “I am speaking on behalf of the family. We are demanding justice,” he said.

Saturday Punch investigation revealed that Gbenga, a two-star (DSI) officer with the Nigerian Immigration Service, began his journey to the world beyond upon his arrival at Hotel Royale, an upscale inn located at Isheri, a suburb of Lagos State, for his honeymoon. The marriage had been consecrated at the branch of Christ Embassy in Oregun, Lagos after which a one-in-town reception was held in Maryland.

Sekola told our correspondent that his elder brother arrived at the hotel in company with some of his colleagues at the Nigerian/Benin Republic border in Idi Iroko, Ogun State where he was serving at the time he got married.

Sekola recalled that Gbenga's colleagues had enjoyed themselves at the bar of the hotel. “They went into the bar and had a nice time before they left. The best man, Jide, who is also an immigration officer, then handed him a ceremonial sword they had used for his wedding.”

Before settling down at the hotel, Gbenga had put a call through to Sekola at the family house on Owolaalu Street, a stone throw from the hotel. By the time Sekola arrived at the hotel, Lolade was having her bath, preparatory to the couple's first night together.

“I arrived at the hotel around 7 pm,” he recalled. “We went into the restaurant and discussed for a few minutes. I later urged him to go up and meet his wife, promising to come back the following day to chat with them.”

If he had had an inkling of the ill fate that awaited his brother, he would probably have followed him to his hotel room. But Sekola is not a prophet, so it was Gbenga that had to see him off before returning to his room.

Sekola said, “I was about to open my door when my phone rang. I picked it and one of my friends screamed that I should come back to the hotel. I asked what the matter was and he said my brother was seriously injured.”

He ran back to the hotel like a possessed man. “I saw my brother lying on the ground in a pool of blood. I didn't need a doctor to tell me that he was dead. I saw the crowd there descending on a man and beating the hell out of him. I was later told that the man was the one that shot my brother. But I was too numb to do anything to him,” Sekola said.

Saturday Punch gathered that as soon as Gbenga left his younger brother and returned to the hotel with the ceremonial sword in his hands, he met Nurudeen at the entrance. The guard asked him what his business was at the hotel. He refused Gbenga entry apparently because of the sword. Some witnesses who spoke with our correspondent at the hotel said that Nurudeen told Gbenga that he would have to confirm from the hotel management that he was a guest before he could be allowed to go in. Gbenga allegedly got angry because he thought that Nurudeen had set out to embarrass him, because he felt that the guard must have seen him when his friends brought him into the hotel.

It was learnt that the argument turned violent and Gbenga allegedly hit Nurudeen twice on the head with the ceremonial sword, causing blood to come out. A furious Nurudeen then rushed into the small room meant for guards, brought out a dane gun and shot at Gbenga who died immediately.

But Sekola denied that his brother hit Nurudeen with the sword. He said, “Yes he was with the sword. But from what I was able to gather, he did not use it on the security guard. I was told that after the argument, my brother got angry and pushed him away from the entrance and he fell. It was the feeling of embarrassment that made him to bring out his gun and shoot my brother.

“You must have found out that the man is one of the leaders of the Oodua Peoples' Congress in this area. And I believe that he was unstable. He was fired from a job before he got the one at Royale. And what he does every night here is that for no reason at all, he would just shoot into the air and scare everybody. The injury he got was inflicted on him by the mob.”

But the management of the hotel said it was concerned more with finding a way out of the logjam than talking to our correspondent. A senior manager in the hotel who pleaded anonymity said, “This is like a bad dream. What can we say? A life was lost here. We are doing what we can to cushion the effect of the death on the family. Not only that, the security man has been arrested by the police. We won't stand in the way of justice. But we know that little patience could have saved the day. We blame the incident on the festivities because ordinarily, common sense would have prevented this tragedy.”

Sekola alleged that the management of the hotel thought they could sweep the case under the carpet before they realised that the immigration service was involved. “I know that they supply the Isheri Police station with electricity. But we will go for justice and we will get it,” he said.

Spokesman of the Lagos State Police Command, Mr FrankMba, said the police was investigating the matter. “As I am talking to you now, the suspect is at the State Criminal Investigation Department, Panti, Yaba,” he said.

What Will The Publication Of 260-Page Cocoa Road Audit Repor...
19 minutes ago