The Ewe Factor In the Political Discourse Of Ghana-2 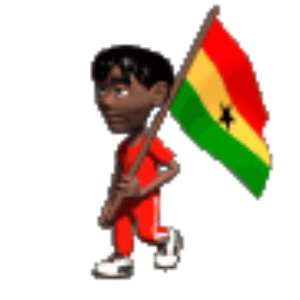 Since the first part of this article was published, I have made quite a number of friends. Some of them have registered eagerness to learn more, others would rather I leave it alone and one fellow wished to put a bullet in my head.

But I love the general reaction so far, in that it will generate and rightly so I hope, the much needed discussion that we should have as Ghanaians and be able to deal a blow, once and for all, to this 'canker' that may very well eat us all up. It is time we put a stop to this 'ostriching' and tackle problems head-on, for once. We cannot just wish it away and we should do away with this notion that Ghanaians are a peace-loving people and so 'it can never happen here'

Who would have thought that Kenyans were anything but peace-loving but we were witnesses to what happened over there. In all of these conflicts, all over Africa and elsewhere, the question is always this: how did neighbours suddenly turn against each other? These people, though from different tribes, have been living together for so many years and what changed suddenly? Well, yes they were living together, and yes they might have been neighbours but that was just physically. The relationship was only 'skin-deep' and it was not a sudden reaction at all; in all cases investigations (after the fact, sadly) show that the underlying causes had been festering for years.

If Ghanaians could be ejected from their rented premises by their landlords for the 'crime' of belonging to an opposing political party that had lost a general election, then I think that there is no better time than now for us to take stock and take these matters very seriously. I have no control over how people should think. All I am doing is to put what I know out there. Each of us can and should react to it as we choose. If I know what you think and you know what I think, then we could operate from the same premise and agree to work towards a solution or even agree to disagree.

An Ewe man was asked why Ewes seemed to be so 'power-conscious' (they would run for anything that provides any form of 'authority', from class prefect to SRC President). His answer was, that was the only way they could exercise 'power' over Akans. This man cannot be taken seriously (?) so let's ignore him and stick to the 'big guns'.

Kludjeson, (an Ewe I believe) it was, who when he had become successful-by Ghanaian standards- decided to hire a chauffeur. He went out of his way to get an Asante. On their way someplace, one day, Kludjeson asked the chauffeur to tell him where he (the chauffeur) comes from. 'Asante region', he replied. He then asked the chauffeur to tell him where he (Kludjeson) comes from. 'Volta region' the chauffeur responded. Kludjeson then said 'so you see who is driving who now and who the boss is?) Why would a man, as successful as Kludjeson, find it necessary to do something like that?

For those who were privileged to get a copy of Prof. Awoonor's book-Ghana Revolution- before it was pulled out of circulation, you would already be familiar with this. He tells us in that book the reason for the 31st December revolution and that is, for Ewes to take economic power out of the hands of Akans (who admittedly formed the majority of business owners then). If you don't want to believe Prof. Awoonor, that's fine. But remember that he was a close confidante of Rawlings. Our people say, you don't challenge the frog when it comes up from underwater to inform you of the death of the crocodile!!!

'miawo dede' or 'miawo de'!!! (as a friend correctly pointed out to me). Were these mere words or were they deeds to back up the words? Those who know the record of the PNDC's Assets Confiscation Committee would appreciate this point.

An Ewe friend of mine pointed out to me, the fact that it was not just Akans that suffered but some Ewes did too. His point was that since Akans formed the majority in business and commerce then, it was a natural consequence that many of them would fall into the 'net' I then reminded this friend that Ewes had never accepted this line of reasoning when it came to the issue of Apollo….. And they had rejected outright the fact that at the time, majority of civil servants were Ewes and so 'it was a natural consequence' that they would be mostly affected by any action to 'right-size' the civil service. My friend had nothing to say after this. So it was all a façade when Rawlings included Amedume and Feli in his murderous firing squads. It was all to give a semblance of ethnic balance, but the real agenda laid elsewhere; and thanks to Prof. Awoonor we know what that agenda was and has been. Some Ewes are so quick to point to the number of Akans in the previous government and use that as a basis for bashing it. Have we forgotten so quickly how every sector of the Ghanaian economy was filled with and by Ewes? From the Amegashies, to the Anaglates and to the Kumedzros. And by the way what is the population (by %) of Ewes and Akans in Ghana? And for lack of a better alternative, and to attempt to be fair, wouldn't it be appropriate to go by these statistics provided by our Census Bureau to fill political positions? And if we go by this then what should the distribution of ministers be (region by region and group by group) seeing that we have 10 regions with many tribal groupings? If we want to create an equitable society where each group would feel adequately represented, shouldn't we be looking at these issues NOW rather than later? By this criterion, the Atta Mills administration has already failed; ministerial appointments have been skewed in favour of a particular group!!!! But you will not hear any public outrage or outcry because……

Again, it is all well and good for one particular region to be singled out to 'house' the capital of the country but it is an abomination to suggest a particular language as the national language (more on this when I address the Gas-my own people).

There was an interesting incident that happened when the Black Starlets won the world cup and the team went to the castle to present the cup to Rawlings. After the initial expression of pride and gratitude, the President went on to bemoan the fact that there were no Ewes in the team. The implicit instruction to the managers was to endeavour to include some Ewes on the team. This was on national TV. Before you ask what is wrong with that, just consider this: A new president takes office and and he/she may be interested in pushing his/her people unto other 'places' besides a football team. How would that picture play out on TV?

If upon return of a Ghanbatt mission from the Middle East, President Atta Mills decries the zero representation of Fantes in the group, I bet there would be an outcry against it and rightly so!!

We are all aware of the Keta Sea defence wall project, I believe. We do know the resources spent on that project by the NDC without accomplishing much. There was this 'thing' about the contract with Pentrexx that I don't want to go into now. In comes the NPP government and among the very first things they tackle is this very project. They take a look at the contract and amend it to include over a 100 housing units for the people in the area. With due diligence the project is finally completed. I don't know what you would have done but this is what the people in the Keta District decided to do: at a district assembly meeting they voted to invite Rawlings to come 'inspect and commission' the project. Mind you the sitting government that actually completed the project had not yet commissioned it. Now word gets to the government of the day that this is what the people had decided to do and so the government puts in mechanism to stop any such attempt. Did they succeed? No!!! Why? Because when the district assembly was denied that authority, they then decided to use the traditional council of the area to achieve the same purpose. The government cannot stop any traditional council (chiefs and people) from holding a durbar and so that was exactly what they did, and yes they did invite Rawlings over. I need some help here, because to date I am still unable to follow or understand the thought processes that informed such a move.

We will continue the discussion later
Yaw Opare-Asamoa
[email protected]