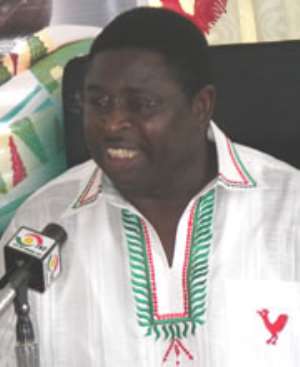 
The First National Vice-Chairman of the Convention People's Party (CPP), Dr Abu Sakara, has called on the party to put an end to the bickering over who is going to be the next flag bearer of the party and rather see to rebuilding the party.

He said looking at elections held in the country over the past years, the party had failed to announce its presence to the Ghanaian electorate and that "to avoid going from invisible to irrelevant, we must once again stoke the fires of the party with a new youthful generation".

This, according to him, must be the present and pressing pre-occupation of the party rather than the ongoing bickering as to who should be the next flag bearer of the party.

Dr Sakara said this at Ho on Tuesday when he addressed the launch of the Centenary celebrations of Dr Kwame Nkrumah, 60th anniversary of the CPP and 52 years of Ghana.

He said commitment to the party had been eroded and that the party would not be revived without this attribute.

"We must take account of the reality of the nature of people that we now have to recruit and institute measures to protect the party from individual interests and capture insurgent elements," he warned.

He said Nkrumahism was no longer the sole preserve of the CPP and therefore there was the need for the CPP to redefine itself to have a unique and recognisable brand.

"More urgently, our message has been clouded by our inability to defend our political space against the NDC and NPP. We must begin now to carry out the basic aspects of party organisation and education to feed into that process with earnestness," he urged.

For her part, the daughter of the late Dr Nkrumah and Member of Parliament for the Jomoro Constituency, Samia Nkrumah, said that the anniversary year should serve as a watershed for all true Nkrumahists to do some serious thinking after coming out of an election with only one parliamentary seat.

According to her, since 1992, the Nkrumahist party had been divided under different umbrellas, adding that there was the need to rally together.

She called on the party to exhibit selflessness in the quest to rejuvenate the spirit of Nkrumah, noting that in an era where power and politics were equated to money, the party must be prepared and willing to make serious sacrifices.

The Ho Central Constituency Chairman of the party, Mr Michael Kosi Dedey, claimed that many people who professed to be Nkrumahists today had failed the country because their claim to be Nkrumahists was only a way to boost their own egos and seek self-aggrandisement.

"Most of us professed to be Nkrumahists, pay a lot of lip service to the Nkrumahist philosophy but do very little to change the material conditions of our people. 52 years after independence, we still cannot provide food, clothing and shelter to majority of our people," he lamented.

For him, the greatest honour that can be given to Dr Kwame Nkrumah is to seek true happiness and the welfare of Ghanaians at all times, saying "this is the guilt that lives in the heart of many professed Nkrumahists".