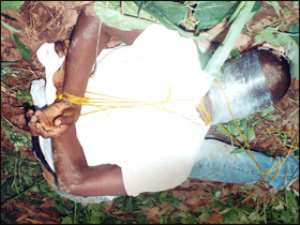 Bashiru Mohammed BASHIRU MOHAMMED, the personal driver of Kofi Nyanteh Akuffo, a Circuit Court Judge at Nsuta in the Ashanti Region, has been gruesomely murdered.

Bashiru, who was also a taxi driver, was last seen on Sunday March 29, 2009 when he was hired by two unidentified persons, to convey them from Mampong to Boanim.

The 23-year-old driver was the next day, found dead in a nearby bush between the Mpim and Boanim road near Mampong.

Bashiru's killers also made away with his Hyundai Pony taxi cab with registration number AS 2725-09.

Both hands and legs of the deceased had been tied behind him with a yellow rope and his body tied to a tree when he was found by a police search team.

At the time he was found, the killers had blindfolded Bashiru, with cuts and bruises all over his lifeless body including a deep cut in the lower part of his abdomen.

The deceased, a Muslim, has since been buried whilst the police have arrested two persons at the Suame Magazine in Kumasi to assist them in their investigations.

The two were Daniel Domfeh, 28, who was in possession of the deceased's taxi cab and one Kojo Adom, 25, who was a liner.

On Sunday March 29 this year, he noted, Bashiru was on his usual rounds at Mampong at around 12.30 pm when he was hired by two unidentified persons, who asked him to take them to a nearby village called Boanim; but Bashiru never returned.

Detective Lance Corporal Agyeman said relations of Bashiru on Monday morning lodged a complaint that the deceased did not return from work the previous day.

The police, he noted, immediately alerted their colleagues in the region to impound and arrest any persons in possession of a Hyundai Pony taxi cab with registration number AS 2725-09.

Around 1:00 pm of the same day, the regional Police Crime Officer informed the Mampong police that a vehicle with the said description and registration had been sighted at the Suame Magazine in Kumasi.

The police, he indicated, swiftly rushed there and apprehended Daniel Domfeh who was then in possession of the taxi cab and one Kojo Adom, a liner and detained them for interrogation.

Later on the same day, the lifeless body of the deceased was found in a nearby bush near the Mprim-Boanim road by a police search party.

Attempts by DAILY GUIDE to reach the Nsuta Circuit Court judge for comments proved futile as his cellular phone was off.