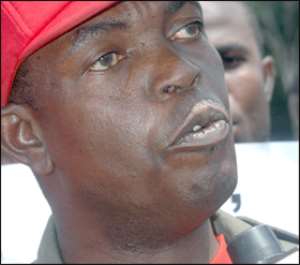 Kwesi Pratt Jnr IT WAS initially dismissed by many as an 'April Fool's'  joke when news broke yesterday that the price of petrol had gone up by 10 percent, but when it was later confirmed,  the ruling National Democratic Congress (NDC) had a hectic time explaining why Ghanaians must pay more for fuel.

Yesterday's increment put the NDC in a rather awkward position, particularly when the party rode to power on the back of crying foul over the cost of fuel and promised to slash down the price drastically if they were voted into office.

At every campaign rally, President Atta Mills, with support from the Kwesi Pratt-led Committee for Joint Action (CJA), promised to reduce the price of petrol drastically.

However, coming under pressure after the electoral victory, President Mills ordered a marginal reduction in fuel prices only to slap Ghanaians with higher tariffs in what observers described as robbing Peter to pay Paul.

While Atta Akyea, Member of Parliament for Abuakwa South, yesterday described the increment as the NDC showing its true colours of deceit and lies, K.T. Hammond, MP for Adansi Asokwa and former deputy Minister for Energy, described the development as a “fraud of certain monstrosity being practiced on Ghanaians” by the NDC-led government.

Officials of the ruling party including Elvis Afriyie-Ankrah, Deputy Minister of Local Government and Rural Development and Dr. Kwamena Donkor, the Deputy Energy Minister, were on a number of radio networks struggling to justify the increases.

They contended that the increases were necessitated by the international price of crude oil and that the NDC had fulfilled its campaign promise by reducing the taxes on the cost of petroleum price.

Atta Akyea opined that the NDC had been deceitful on the issue of petroleum prices in the sense that the government, less than a month ago saw to it that the tax component on fuel was reduced by 5 to 10 percent  when the party was aware that the reduction was only cosmetic and for a short period.

Indeed, prior to the said reduction, Atta Akyea noted at a news conference that he had information that the government was about to play on the intelligence of Ghanaians with the issue of fuel price by embarking on a temporal reduction of the price.

He had noted at the news conference that “...the government is about to play with the intelligence of the Ghanaian people to score political points; it is to the effect that the price of petroleum will be reduced. Petrol will experience a reduction of five percent and then diesel and kerosene will be 10 percent…

The embarrassing aspect of what we are hearing, and we hope it is not true, is that after they've done this within a month or so, they would come back and announce that it is having a biting effect on the economy and therefore they have to restore the prices of petroleum to some realistic levels”.

The Abuakwa South MP explained that though the newly announced prices could be understandable, considering the current economic situation, the government ought not to have reduced the tax component on fuel price and deprive itself of needed revenue just to satisfy a populist agenda and an impractical campaign promise.

K.T. Hammond, on his part said the government had no business increasing fuel prices when the international price of crude oil was less than $50 per barrel. He asked the government to apologise to Ghanaians for the increment.

Meanwhile the Committee for Joint Action (CJA), a pro NDC political group that had been very vocal on the need to reduce the price of petrol, had apparently lost its voice over yesterday's increment.

The group, of which Kwesi Pratt is the Field Commander, was virtually an arm of the then opposition party and in the wake of the 2008 electioneering campaign, was consistent in spearheading street protests, demonstrations and blistering attacks on the New Patriotic Party (NPP)-led government in the name of calling for a reduction of fuel prices.

In an apparent 'thank you for a job done well done' gesture, President Atta Mills, on winning the elections, appointed as ministers and deputy ministers, all except for three of the CJA leaders who gave the former administration a hard time.

Mahama Ayariga, presidential spokesperson, told Citi FM yesterday after a hurriedly organised press conference at the Castle, Osu that the NPP should be blamed for the volatile oil situation.

According to him, the NPP's refusal to increase petrol prices in April last year when crude price reached an all-time high of $147, had resulted in the accumulated debt for Tema Oil Refinery and therefore Government intervention should not be expected.

This statement flies in the face of the comments made by his boss, President Mills that the consumers should be supported with subsidies.

He said the only thing government could do now was to appeal to transport operators not to increase fares.

With inflation soaring, the latest action might deal another blow to curtailing the rising inflation.