By The African Executive 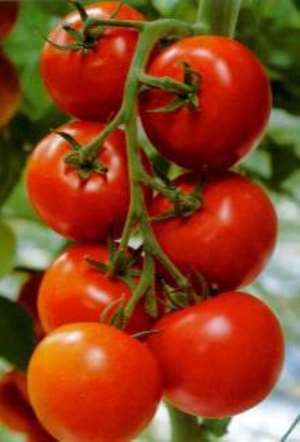 In spite of the global financial crisis that has led to rethinking of credit, AGRA and Standard Bank have announced a $100 Million in Affordable Loans for Agricultural Value Chains in Ghana, Mozambique, Tanzania and Uganda.

Tomato: Farm Product Photo: Courtesy
Standard Bank, Africa's largest bank, has teamed up with the Alliance for a Green Revolution in Africa (AGRA) to create an innovative fund for Africa's smallholder farmers. The fund will operate in Ghana, Mozambique, Tanzania and Uganda, opening loan opportunities to smallholder farmers and small- and medium-sized agricultural businesses previously considered too risky for lending. AGRA and other partners are providing a US$10 million loan guarantee fund, and in turn, Standard Bank is making US$100 million available for lending over three years.

A memorandum of understanding governing the partnership was signed on 18th March 2009 in Accra, Ghana by Chief Executive of the Standard Bank Group, Mr. Jacko Maree; President of AGRA Dr. Namanga Ngongi; and Minister of Agriculture of Mozambique, His Excellency Soares Nhaca, who is also a board member of the Millennium Challenge Account Mozambique, the first country partner of the programme. Ghana's Millennium Development Authority (MiDA) is joining the partnership.

According to Koffi Annan, inflation, food shortages, and trade imbalances all pose huge social, economic, and political risks. While credit is frozen worldwide, he notes, programmes such as this, which increase the productivity of smallholder farmers will ultimately enable Africa to achieve food security and stability.

Lack of access to finance prevents farmers from investing in basic inputs, such as good seeds, fertilisers and small-scale irrigation needed to raise farm productivity and generate profit. As a result, their yields remain one-quarter the global average, leading to pervasive hunger and poverty across Africa. Little or no commercial financing has been available to entrepreneurs seeking to build businesses that could boost Africa's food production and enable farmers to earn a profit.

“As a leading emerging markets bank, our goal is to perform a transformative role in the continent's agricultural sector in partnership with other organisations. Transforming small scale farmers into medium-sized enterprises is essential to address the food security and to stimulate economic growth,” says Jacko Maree of Standard Bank.

Across sub-Saharan Africa, although the agricultural sector generates significant percentages of national incomes; it receives only 1 percent of total commercial lending. Since a huge percentage of this money goes to large-scale agriculture, smallholder farmers are disadvantaged. According to Nhaca, for example, 45 percent of the population in Mozambique is undernourished with only few smallholder farmers being able to access high-yielding seeds and fertilizers. “The need for financing is especially urgent now to ensure that farmers have access to inputs for the planting season,” he observes.

The Standard Bank/AGRA loan programme however combines the power of partnerships with an innovative financing mechanism designed to mitigate the risks facing commercial banks in lending to the agricultural sector in Africa. The loan programme builds on earlier work of The Rockefeller Foundation in Uganda that helped to leverage loans to small-scale farmers and that five years later had a loan default rate of less than 2 percent.

The US$100 million AGRA-Standard Bank partnership will create the largest single financing facility targeting smallholder agriculture by a bank in Africa - a milestone of confidence in the capacity and entrepreneurship of African farmers.

Participating countries will begin processing loan applications from farmers and farmers' groups, seed companies, rural retailers of farm inputs, crop storage facilities, agro-processing businesses and other enterprises that together are needed to increase the productivity of smallholder farmers and build a robust food production system. The agreement includes provisions designed to maximise the opportunities for farmers and small-scale businesses to succeed, including technical and business development support, quality control of produce and support in applying for credit.

By Josephat Juma
The African Executive